We usually associate nail biting with older kids, but toddlers can pick up this habit, too. What should you do if your toddler bites his nails, and why is he doing it in the first place? 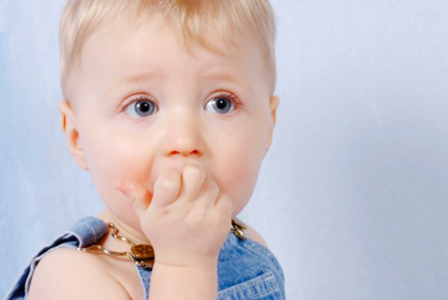 Toddlers are anything but boring. As parents, we often find ourselves completely baffled by these budding little people, who are now old enough to have opinions and a will of their own. So when your toddler develops a new habit, it can be frustrating to try to help her break it. One of the most annoying habits parents report is nail biting, and it happens in toddlers as well as in teens.

Why do they bite?

For people who have never dealt with a nail-biting habit, it may be difficult to understand why a child would bite her nails. Habits like nail biting can be brought on by a variety of issues, including boredom, stress, anxiety, changes in routine, curiosity or just plain habit. If your toddler suddenly begins to bite her nails, think about what’s going on in her life. Has she recently started attending a new day care, or has she started a special class? Are there extra stressors in the home, like a new sibling or a pet? Maybe the biting is situational, meaning that it only seems to occur when your child is watching TV or riding in his car seat, for example. You might be able to recognize a stressor immediately, but the nail biting can just as likely happen for no apparent reason at all. Other similar habits include hair twisting, nose picking, hair chewing, teeth grinding or thumb sucking.

If your toddler suddenly starts biting his nails, your first response may be to reprimand him. The problem with these behaviors is that often, the child has no idea he is even doing it. Punishing your toddler or speaking sternly to him when he starts biting may only aggravate the stress that’s causing him to bite in the first place. If it seems to be simply a way for your child to cope with a specific stressor — and if you can let it go for the time being — then it’s a relatively harmless habit. It is likely that your child will eventually stop nail biting on his own, but some parents can’t just sit by and wait it out.

Janis Keyser is a parenting educator and co-author of Becoming the Parent You Want to Be.

“Our initial response when children do something that worries us is to try to stop the behavior, and that’s fine as a long-term goal,” she shares. “But before you can do that, it’s essential that you deal with the underlying causes of the behavior and think about whether there’s stress in your child’s life that you need to address.”

It may be more difficult to deal with toddlers who develop a nail-biting habit, simply because they are not as able to talk their feelings out as an older child would be. Toddlers may not yet have the verbal ability to express any stress they may be feeling, although as a parent, you may recognize that stress right away.

How to deal with nail biting

If the nail biting habit is preventing your toddler from playing or eating, or if it is taking up an extraordinary amount of her time, there are a few ways you can try to help her stop. It helps if she also wants to stop, yet it’s fairly hard to imagine that a child that young would be motivated to quit. Here are a few ways you can help your toddler recognize that she is biting — and help her stop.

When should I worry?

Most nail biting is really more of an aesthetic issue than a health-related one, but there are circumstances in which parents really need to make the choice to step in. If your little one is biting excessively, causing his fingers to bleed, then there is more of a concern about infections that could become serious. Also, pay attention to his behavior if he is pulling out hair or eyelashes, scratching at his skin or picking scabs. These could be signs of a more serious anxiety issue, and you should raise your concerns with your child’s health care provider.

Terrible twos? What about the threes?
How to deal with toddler nightmares
When your toddler won’t nap