It’s all over the news that kids and concussions are a bad mix. Many parents are thinking long and hard about whether or not to allow their kids to play contact sports. Now, a new study suggests a link between concussions and depression. 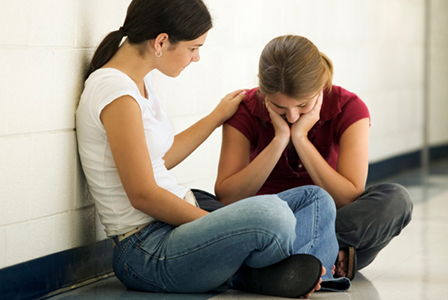 If your child plays contact sports, you probably have concerns about concussions. With studies indicating that the effects of such injuries may last well into adulthood, concussions have become a major concern for parents. A new study in the Journal of Adolescent Health found that teens with a history of concussion are three times more likely to suffer from depression.

Effects of concussion on teens

While the psychological effects of concussions have been studied in adults, not as much is known about the effects of such injuries on teens and the long-term complications that teens who’ve had concussions may face. Whether your teen has suffered a concussion in a football game, a car accident or a fall from a trampoline, the nature of these injuries can be deceptive. Even when your child seems fine on the outside, the psychological damage remains unseen and may present long-term difficulties.

In order to determine what effects concussions may have on teens, researchers analyzed data from the 2007-2008 National Survey of Children’s Health, which includes health information from more than 36,000 children ages 12-17. Of this sample of children, 2.7 percent had suffered a concussion, and 3.4 percent had been diagnosed with depression.

Jeffrey Max, M.D. — a psychiatrist at the University of California, San Diego — specializes in psychiatric outcomes of traumatic brain injury in children and adolescents.

In addition to the apparent increase in depression, the research indicated that children with this type of injury are more likely to have trouble controlling their moods and are more likely to be diagnosed with attention deficit hyperactivity disorder (ADHD).

According to Sara Chrisman, M.D. — a pediatrician at Seattle Children’s Hospital and the study’s lead author — teens who had a parent with a mental disorder or who lived in poverty had a higher than average likelihood of being depressed. But what surprised researchers was the fact that the association between depression and a history of concussion still remained when these other factors were taken into account. It’s still unclear why teens with a history of concussion have higher rates of depression. The link could result from a number of factors — including the social implications of isolation during recovery, repeated physician visits or symptoms of concussion being mistaken for depression.

“What this study suggests is that teens who have had a concussion should be screened for depression,” said Dr. Chrisman.

Brain injury is the likely cause

Dr. Max, however, observed that it is the actual brain injury associated with concussion that most likely causes depression in the months immediately following the injury.

Concerned about concussions? If your child has suffered a concussion, consult your physician to determine what steps you should take on the road to recovery. While there is still a lot to learn about the long-term effects of concussions in children and teens, it makes sense to stay on top of the latest research.

Teens get Seasonal Affective Disorder, too
Teen spotlight: I am a cancer survivor
Is your teen choosing to chew?