Some of the television programs that air on kid-friendly stations are not so good for kids after all. Help your kids steer clear of these bad influences. 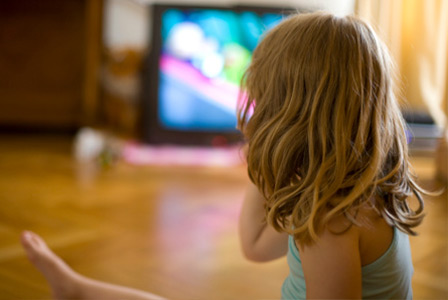 In our informal survey, this show about underwater life was mentioned by parents more frequently than any other TV show. Common Sense Media describes the cartoon as containing “violent, dark, satirical humor that will confuse kids who can’t separate fantasy and reality.”

Most parents, however, simply dislike the name calling: “idiot,” “stupid” and other insults plague every episode.

“It’s just inappropriate,” says Ashley, who has 5-year-old and 2-year-old daughters. “Some of the stuff they say or do isn’t kid-friendly.” Laura agrees: “I feel like it’s the equivalent of Beavis and Butt-Head for toddlers. The voices are like nails on a chalkboard.”

Bottom line: Common Sense Media reminds parents that the show is intended “to entertain, rather than to educate.”

Miss Manners would be horrified by the bad behavior on Uncle Grandpa. “Body-related gross-out humor is the main offender,” reports Common Sense Media. “Issues like obesity, farting and the removal and ingestion of one’s own body parts are revisited ad nauseam.”

While watching Ninjago on the Cartoon Network, Katie’s kids got “so excited” for Uncle Grandpa. “We got about three minutes into the premiere episode before I pulled the plug,” says Katie. “It was funny, for sure, but not so much for my 8-, 5- and 3-year-olds.”

Mom of two, Kris, sees a common theme among children’s television shows. “Almost every one of them depicts bad manners in some form,” she says. “Kids burping, farting, being disrespectful to adults or talking to adults like peers — it’s become so difficult to teach manners. I had hoped that kids’ TV would reinforce respect and good manners, but it actually does the opposite.”

A PBS show featuring a little 4-year-old boy has to be kid-appropriate, right? Not according to some parents. The show makes a serious effort to be educational in content, but viewers have to deal with an annoying little guy named Caillou.

“We let our son watch most shows, but I do wish Caillou would just go away,” says Muffy. Mom of three Megan has had her fill of the the bald preschooler, too. “I never let my kids watch Caillou. All that kid does is whine and disobey.”

Bottom line: Common Sense Media explains that the main character deals with “fear, anger, loneliness, anxiety and empathy” while exhibiting “realistic behavior typical of a 4-year-old.” If you already have a whiny kid in the house, you might not welcome another one via this TV show.

Sam & Cat also earned a paltry 2-star rating from Common Sense Media. Juvenile delinquent Sam Puckett (from iCarly) is paired with flaky Cat Valentine (from Victorious) for a pointless double spin-off series. As with most Nickelodeon shows, there is nary a parent in sight, “which gives teens free rein on mayhem and sends skewed messages to kids.”

Find out who the Frozen writers would cast in Frozen 2 >>

Sarah has two school-aged boys and is simply not a fan. “I just don’t understand what anyone would find appealing about the pairing of a mean girl with an airhead. I don’t want my kids copying any of their bizarre behavior.”

Bottom line: “There’s little harm in the light-hearted content,” reads the Common Sense Media review. “But since there’s nary a shred of realism to much of what goes on…it’s a good idea to do a reality check with your kids to remind them how similar actions would play out for them.”

A kids’ cartoon that features violence, crude language, ethnic stereotypes and beer? Regular Show targets non-adults, but it’s not at all suitable for kids. With the show, you’ll get a fair amount of what Common Sense Media calls “fantasy violence” — kicking, punching, throwing and the like — along with “salty language,” including choice words such as “crap,” “pissed” and “screwed.”

Dr. Carole Lieberman is a well-known media psychiatrist who analyzes the media’s impact on our psyche. “Any TV show that portrays even the smallest amount of violence should be avoided,” says Dr. Lieberman. “Kids who watch violent media have more fights on the playground, more nightmares and are more desensitized to real-life violence.”

Beyond the violence, Regular Show characters are seen drinking beer to the point of drunkenness or sickness. Mom, Kim, shields her family from inappropriate fare by not bringing cable into their home. “When we visit family, I do not let my kids watch SpongeBob and Regular Show, which are not very appropriate for the elementary school crowd.”

Bottom line: Violence, beer and nasty language certainly makes this one off-limits to the younger set.

More girl-on-girl drama! We have a responsibility to lead our daughters away from cattiness and brattiness. Every Witch Way fights us tooth-and-nail and tries to entertain us with girls battling for stature and the affection of boys.

“I want to teach our girls to empower themselves, not to give their power away to the ‘popular’ girl,” says Sandra, whose twin daughters are 10-years-old. “We won’t be watching this one.”

Bottom line: Common Sense Media doles out yet another 2-stars. Every Witch Way “devotes too much time and energy to [lead character] Maddie’s superficiality and spite to be considered a likable choice for this impressionable age group. And since none of Maddie’s actions ever land her in hot water, she can’t work a spell to escape, kids never see her learn a lesson.”

Keep in mind that just because a show airs on a so-called children’s channel, it’s not necessarily kid-friendly. “We urge parents to be cautious when it comes to cartoons, as not all are created equal,” says Melissa Henson, director of grassroots education and advocacy for the Parents Television Council.

Beginning March 2014, Cartoon Network’s “Adult Swim” block will begin as early as 8 p.m. EST. “Adult Swim has very high-levels of explicit content that the network doesn’t even rate as inappropriate for children,” cautions Henson. “Parents have to be on high-alert when it comes to what their children watch.”

13 hrs ago
by Eugenia Miranda Richman