Nearly 40 students at a Utah elementary school had their lunches thrown away after they’d sat down and started to eat. Is this a lesson in staying out of debt, or was the school totally in the wrong? 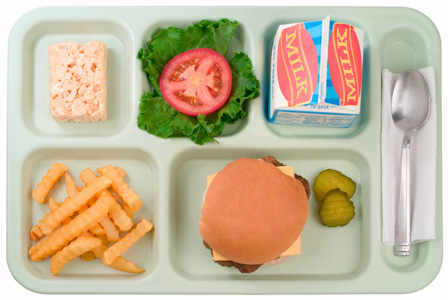 If your child’s lunch account goes into the red, do you know what happens? In many school districts, there are alternative lunches given, and notes or alerts are sent home to the parents. For nearly 40 students at Uintah Elementary in Salt Lake City, Utah, however, cafeteria staff took their lunches away from them and chucked them into the garbage in front of their classmates. What?

Apparently there was a little miscommunication between the child nutrition department, which handles lunch money accounts, and the school. These children’s balances were out of funds, but they didn’t contact the school until lunch had been served — an entire day later. So, whatever policy the school has, we must ask… does it include taking the lunches away from the kids and trashing them in front of the entire cafeteria?

Believe it or not, some feel that this experience might actually serve to be a good life lesson for these kiddos. “Let’s reframe the issue here,” writes a user on Gawker. “It’s not snatching food from the hungry. It’s teaching those children the value of paying your creditors on time. Given their parents’ apparently dire economic straits, it’s an important life skill for them to learn at a young age.”

However, thoughts like this are definitely in the minority, and many parents agree that these actions themselves could fit the definition of bullying. “I think that this is so wrong that I am having trouble finding the proper words to express how wrong I think this is,” says Bethany, mom of two. “I get stabby when I hear of people wasting massive amounts of food while others starve in the street, but this is just plain despicable. To take food from a hungry child while they are eating it is just cruel and unnecessary. Whoever had the idea to do this should be fired.”

And this can also set up these kids to be bullied by others, as T

raci, mom of five, points out. “The kids should not be punished and humiliated for their parents’ mistake or wrong doing,” she tells us. “If someone did something like this to Aiden he would be devastated — he is such an emotional little boy when it comes to things like this. Plus with the whole bullying issue and kids that make fun of other kids that goes on in all grades… now those kids have been targeted to possibly be made fun of.”

There are definite alternatives to embarrassing the kids in front of their peers, and being up-to-date in a computer system can really help alleviate these problems before they begin. Lisa used to teach high school and they had a policy in place for an alternative lunch, but they can’t hand out food for free for long. “You wouldn’t believe the number of kids who don’t have money or money runs out on their account,” she shares. “If they allowed kids to charge their lunches, it is a lot of money that is handed out for free. Parents are notified by notes sent home or phone calls, but at some point parents have to be responsible. However, I think this situation was handled very poorly. If you trashed it, isn’t it already defeating the purpose of saving money?””

The Salt Lake City School District has since posted an apology to its Facebook page, but judging by the responses, it doesn’t mean much. Lunch money accounts can run out for many reasons, but none of those reasons make these actions acceptable. What do you think?

What you need to know about school lunches
Are your kids really eating their school lunch?
Teaching kids to pack their own lunches