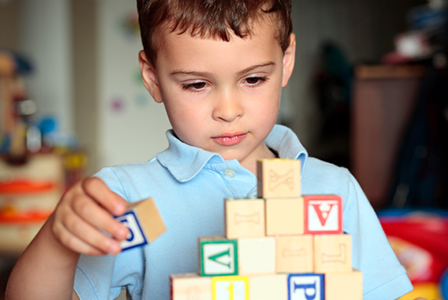 What does that mean for your child currently diagnosed with autism spectrum disorder? Find out how the new DSM-5 guidelines for autism diagnosis will change the way children receive services.

The American Psychiatric Association has released the latest edition of the Diagnostic and Statistical Manual of Mental Disorders(DSM), the DSM-5, in which the criteria for autism diagnosis is redefined under more conservative guidelines. While DSM-5 will include roughly the same number of disorders as the previous DSM-4, some disorders have been eliminated while others — like Asperger’s disorder — have been combined. Under the new autism criteria, Asperger’s will now be included in the category for autism spectrum disorder (ASD).

Though it’s important to more accurately define mental disorders to avoid over-diagnosing — and in some cases over-medicating — patients, the new criteria has many parents concerned. What do the new guidelines mean for kids currently diagnosed with an ASD as well as those who may require autism resources in the future?

Do you share these concerns about special needs evaluations? >>

AutismSpeaks.org reports that according to statements made by the DSM-5 committee, children currently diagnosed on the autism spectrum will not lose their ASD diagnosis or the autism services associated with it and that no new re-evaluation is necessary. This includes anyone with a previously well-established autism diagnosis of autistic disorder, Asperger’s disorder or pervasive developmental disorder not otherwise specified under the DSM-4 guidelines. Although the new autism diagnosis guidelines were released in May 2013, the Centers for Disease Control and Prevention’s report in this month’s JAMA Psychiatry suggests that the new autism criteria could decrease the number of children diagnosed with autism spectrum disorder.

This leaves many fearing that kids who currently are diagnosed with ASDs may lose their diagnosis and the services associated with it, which the media is reporting some insurance carriers and school districts are already doing. “We get all of our son’s autism resources through the school district, and we just had our annual IEP meeting and none of our services changed,” shares Natalie Milloy, California. “However, regardless of the DSM changes our insurance does require re-testing every year, which could affect kids who receive their autism resources through insurance. Fortunately, we do not.”

Children who do not qualify under new autism criteria

While the study shows that 81 percent of children analyzed under the DSM-4 guidelines would still receive an ASD diagnosis under the DSM-5 criteria, inevitably, the new standards will exclude some children in need of autism services. But, this doesn’t mean that kids who clearly would benefit from services of some kind would be left out in the cold. Research speculates that children who do not qualify for autism spectrum disorders who previously would under the old guidelines will likely be diagnosed under a different disorder.

For example, youngsters who would have received a diagnosis of pervasive developmental disorder not otherwise specified (PDD-NOS) under the old guidelines would now receive a diagnosis under a new category called social communication disorder (SCD). What isn’t clear is whether or not insurance carriers will cover these new non-ASD categories.

As research and understanding about autism spectrum disorders advances, autism diagnosis and treatment will inevitably change and evolve — likely leaving some parents unhappy. But, regardless of the changes in the DSM-5’s autism criteria, awareness of autism spectrum disorders has boomed in recent years. There is more information available to families by simply searching the web, even if these services, therapies and autism resources have to be administered by parents at home independently.

More about kids with special needs