Baby name inspiration can come from anywhere — even your favorite TV show. These cute and trendy baby names come directly from the tube. 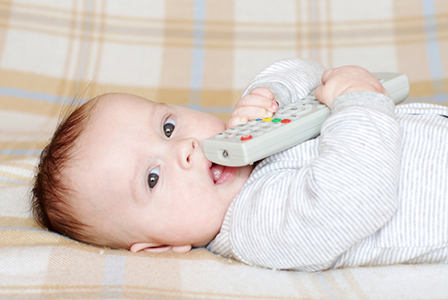 Is it cheesy to get a baby name from a TV show? No way! Script writers often have creative license to weave whatever names they like into the stories they pen, which means that they can come up with and use some pretty awesome names. These can be traditional names that correspond to the year when the characters were born, or they can be a little more modern and trendy.

We love all baby names, of course, but to narrow it down to a few trendy choices, we’ve taken names from TV shows of the present and the past that are a little more on the hip side. For example, The Cosby Show was huge in the 80s and the early 90s, but Theo is a name that, while traditional, sounds like a really cool modern choice for your baby boy.

The TV character him- or herself can really make or break a baby name, but sometimes the name is so completely cool that it transcends whatever oddity, weirdness or heinousness a TV character portrays. Can you name your baby Dexter after watching the show of the same name? Maybe, maybe not. It’s up to you to decide.

We’ve also taken a few awesome names from reality TV programs, like Alton, the host of Good Eats. Which character names have stood out to you as you’ve taken in a show or two? Did they make our list?

24 mins ago
by Sydni Ellis