When you nurse your baby, do you know if she has a good latch? Here’s how you can tell, and how you can work together to improve it if needed. 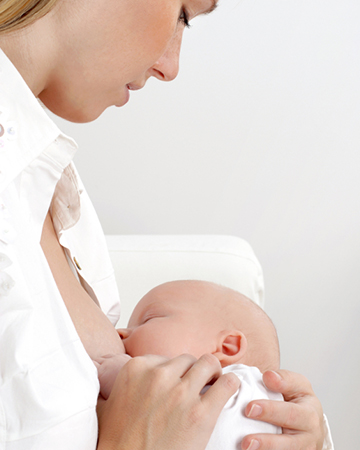 Before you had a baby, you probably weren’t aware that a proper latch can make all the difference in a breastfeeding relationship. From getting the basics of breastfeeding down to finding out if there are other issues at play, we’re running down the details of a breastfeeding baby’s latch.

A good latch will really help you lower the risk of developing breastfeeding issues, such as pain for you or lack of weight gain for your baby. How do you know if your latch is good enough? According to KellyMom, when Mom is comfortable and Baby is effectively transferring milk, the latch is, by definition, considered to be a good one.

As simple as that sounds, it is a good idea to try to get off on the right foot when it comes to latching your baby on. With a good latch, look for Baby’s lips to be splayed out instead of sucked in and for her chin and cheeks to be the only parts of her face that are touching your breast. You don’t want your infant to suck only on your nipple — not only is this painful, but it can have major impacts on your milk production.

It can help to study good latch photos or videos before your baby is born, as Jana, a mother of one, discovered when she went to nurse her own newborn son. “I had initial latch problems just because I had no idea what I was doing and didn’t remember ever actually seeing anyone nurse a baby,” she shared. “Thankfully watching Dr. Jack Newman’s videos got me straightened out pretty quickly.”

There are a few additional issues that babies can have that may lead to a poor latch, resulting in early weaning or other unwanted breastfeeding outcomes. “We had major latch problems,” shared Jenni, a mom of one. “It turned out that he had a tongue tie and we didn’t figure that out until he was about 3 or 4 weeks old. He also had torticollis, which wasn’t diagnosed until he was closer to 3 months old. That made sense later as playing a part in the latching issues, because he could only be laying on one particular side comfortably. The tongue tie issues gave us such problems that I ended up exclusively pumping and by the time we got his tongue snipped, he was so accustomed to having a bottle that he wouldn’t latch anymore. I ended up exclusively pumping for about 10 months.”

If you aren’t able to determine if your baby has a good latch or feel that you can’t get a good latch, no matter what you try, seek help from a certified lactation consultant who can not only help your baby open up as she approaches the breast, but can also identify any problems that are causing the latching issues, like Jenni did. These professionals are there to help you — contact your local hospital or La Leche League and enlist their help.