Officials have removed a toddler and three siblings from their home based on an investigation that began with the boy’s obscenity-riddled tirade that adults encouraged and videotaped — but is the removal from their home over the top?

Related story Toddler Books That Are So Fun, They Won't Know They're Learning 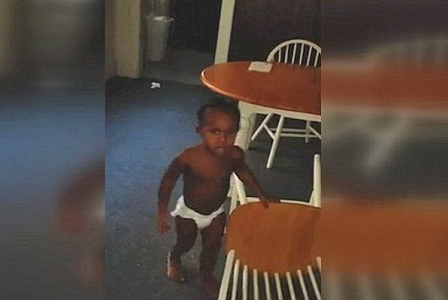 A diapered toddler’s video is going viral, but for all the wrong reasons — and as an ultimate result, he and his siblings have been removed from the home. Was the video bad enough to warrant the investigation and subsequent removal, or have the police overstepped their bounds?

An Omaha, Nebraska toddler is the subject of a disturbing, vulgar video (link to uncensored video), which shows the diaper-clad tot as the subject of bullying, obscenities and racial slurs. He repeats back some of the foul language, with appropriate hand gestures, much to the delight of those videotaping him, who continue to encourage the behavior — and it’s all caught on tape.

The video was posted on the Omaha Police Officers Association website to demonstrate a point, and after outrage from the public on whether a crime had been committed or not, Omaha police’s Child/Victim Unit and the Nebraska Child Protective Services conducted a joint investigation. They then cited safety issues in the home and placed the boy and his three siblings into protective custody.

While the video itself wasn’t the top reason for the children’s removal, some parents were a little taken aback at the measures employed in this case.

“Racial slurs and curse words are a common part of our language today,” shared Jenna, mom of two. “Young children repeat what we say. The other unsafe conditions were not elaborated on and I would hope those conditions are what led to the children’s removal from the home.”

Other parents felt that the video itself toed a fine line between morality and legality. “Not sure if they had the legal right to remove the child from the home because of what they’re teaching him — but morally, I agree with it,” explained Becky, mom of three. “I tried not to relate it to ‘bully bred’ dogs. If a human is found with a dog that they are training to fight, the dog is removed from the person and there is a criminal investigation and legal repercussions. Morally, I think this is on the same level.”

Lindsay, mom of two, had similar feelings. “That is obviously not a healthy environment for a child,” she explained. “People are arrested for crimes based off online posts and videos. Why not protect children through the same means?”

No matter what the investigation found out, most parents agreed that this situation was essentially an abusive one. As Emily, mom of four, summed up, she may have the bottom line here. “Verbal abuse is still a form of abuse,” she told us. “I am not sure that removing the child was the correct action to take but some sort of disciplinary action should probably be taken.”

Should a pregnant woman be forced to remain on life support?
ADHD: Is it real, over-diagnosed or completely made up?
Biggest parenting news stories of 2013

20 hrs ago
by Racheal Pulver