Marianne Canada worked her way from bartending to her dream job in front of the camera at HGTV. Find out how this crafting maven made her career dreams come true while starting a family. 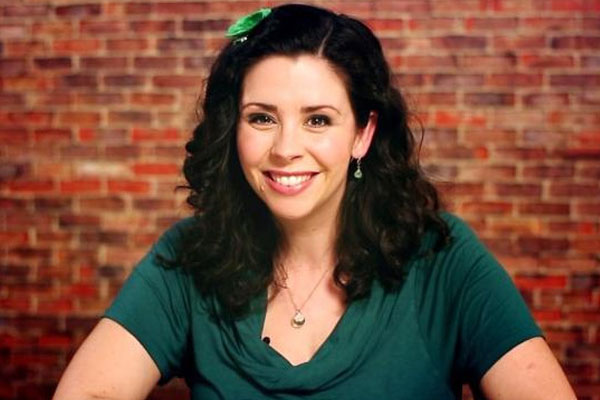 Chic mom Marianne Canada didn’t know what she wanted to be when she grew up, but she knew she loved two things — making and public speaking. A long series of career jumps led her to her current dream job, as the host of HGTV’s original web series, Weekday Crafternoon.

In college, Canada changed her major five times before pursuing a major in broadcast journalism. “Thanks to a high school that required annual speeches in front of the entire school and a father who is still an amazing orator, I love talking in front of people,” she says. Canada missed her own college graduation to jump on the opportunity to work with the National Theater of Slovakia. When her contract ended, she sold her car and moved to New York City. There, she got a new job — as a bartender.

Bartending as a life lesson

Bartending in her early 20s wasn’t a pit stop, but a valuable career opportunity. “I learned so much about working with people, managing personalities, and yes, how to make a hell of a cocktail,” says Canada. “While bartending was just something to pay the rent at the time, I have used the skills I picked up in everything I’ve done since.” She soon moved on to work in promotions for Red Bull, doing events in the Southeast. After quitting that job, she spent time as a food blogger and then decided she wanted to learn about television production.

Going to the dogs

In the television world, Canada had to work her way up from the bottom. In her case, the bottom was a job as a production assistant on a doghouse show called Barkitecture. “One shoot took place at a home with five English bulldogs, and I was charged with keeping them all clean and presentable, as well as their bathroom breaks,” Canada says. “One of the bulldogs got loose and all hell broke loose. Don’t worry, I found him.” As her experience built up, Canada found her niche in casting and location scouting. “It was so gratifying to see a commercial go from words on a script to fully realized, knowing that I found the perfect location,” she says.

When the stars align

Canada relates closely to maker culture. “I have always said I come from a family of makers — my father is a writer and minister, my mother an artist and master gardener, both of my sisters are artists and my brother is a musician (and environmental engineer),” she says. Her love for television production and her love for making collided when she was giving the opportunity to host Weekday Crafternoon, an original web series by HGTV. “Stars kind of aligned and my boss saw an opportunity for me, and I just ran with it,” she says. “I am lucky enough to not only make beautiful things for a living, I get to teach people how to make them. Empowering people with the knowledge that they can make beautiful things too — that’s the best part of being a maker.”

With a new baby this year, life has been hectic for Canada. She recently designed her newborn son’s nursery and documented it on her HGTV blog. “I think most people think I must be a type-A supermom at home, but really I have learned to let a lot go,” she says. “Everything doesn’t have to be perfect and sometimes it’s OK to just buy a Halloween costume instead of making one.” Canada’s 4-year-old daughter Lulu is already following in her mom’s footsteps. She loves crafting and has already appeared on Weekday Crafternoon.

Real mom story: My child was bullied
Be present: Life lessons from a mom living with terminal cancer
Mom story: I founded an allergy-friendly bakery

8 hrs ago
by Racheal Pulver