Sixty. The number 60 doesn’t represent my IQ (though it’s not dramatically far off). Sixty however does represent the number of seconds in a minute, and the number of minutes in an hour. In marriage, 60 is the diamond wedding anniversary. Sixty is the number of homeruns Babe Ruth hit in 1927 (without taint of performance-enhancing drugs). 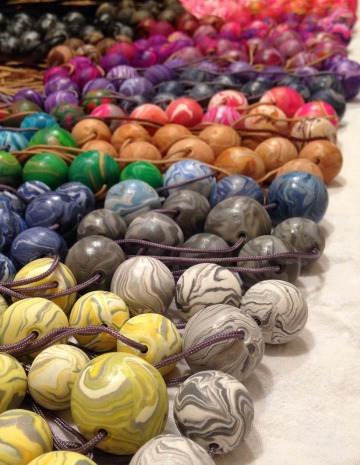 Sixty is also the number of gifts I must buy this holiday season to thank my kids’ school administrators, educators, private therapists and after-school instructors.

Each year, I struggle to find the perfect gift. After all, each administrator, educator, private therapist and instructor truly gives their heart and soul to make sure my children — especially my son Ethan who has PDD-NOS — thrive and flourish, and are owed such a debt of gratitude, that one holiday gift seems inequitable. In the past, they’ve received wine totes (they do work with my children after all, so it’s no secret that they might need a little something to calm the nerves), beach bags and autism-inspired bracelets.

Two weeks ago, panic set in as the holidays were upon us and my brain shut down. Then karma struck at the most opportune time, in the most karmic way, at the most apropos event — The Winter Ball for Autism — presented by Autism Speaks and New York Collaborates for Autism, in New York City. It was there that I noticed two young girls accompanied by their mothers and each wore two unique marble necklaces. Intrigued and completely without a social filter, I walked up to these complete strangers and said in the most sophisticated-though-I-never-went-to-boarding-school-you-wouldn’t-know-it way, “Hey. What’s up with the necklaces? Love them!” Their story is “Marbelous.”

Marbelous, which as their business card states, was “created by two 8-year-old best friends” (they are now 9), launched in May 2013. Sue Kramer and Rachael Stone Olmi were complete strangers, until Rachael’s family moved in next door to Sue’s. Cue the Twilight Zone music because Hollywood couldn’t write a better script.

Sue and Rachael discovered that each had three sisters, and both women married European men. They also each had a daughter — Sue’s named Lutece (pronounced Lu-tess) and Rachael’s named Tess. The girls were born on the same day, hours apart. Coincidence? Maybe. Destiny? Absolutely.

When Lutece and Tess started Marbelous, the intent was to make necklaces, but more important, to immediately make a difference in the world. 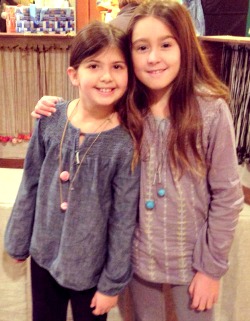 Marbelous stands for so many things — friendship, love, healing — a big round “Marbelous” world. Tess’s cousin Sam has autism, so it was decided Autism Speaks would be their charity of choice. For every necklace sold, Autism Speaks receives 10 percent. Marbelous created an exclusive Smart Girls marble for actress, comedian, voice artist, producer and writer Amy Poehler’s Smart Girls movement, and for that particular marble, Autism Speaks gets 15 percent.

After our conversation, Sue, Lutece, Rachael and Tess excused themselves to present Billy and Gena Mann, one of the evening’s three honoree couples, with the first (of many) Marbelous Autism Speaks donations. (Although I am not fully convinced they weren’t just trying to escape the unfiltered lunatic with shocking fake blonde hair that stood before them.)

All I had to hear was “benefits Autism Speaks” and I was sold. What could be more perfect for those who work with my children than to gift them with something that also helps so many? For my family — and for the tens of thousands of families who have a child with autism — nothing could be more Marbelous.

You can find Marbelous on Facebook or reach them by email at info@marbelousinc.com.

Best iPad apps for children with autism
Your child has autism: Now what?
I notice… you don’t have autism