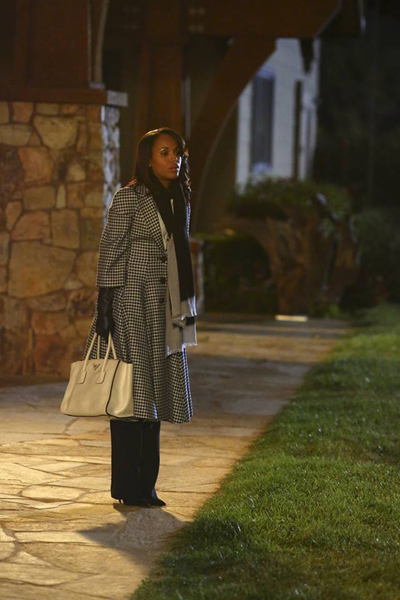 It’s Olivia Pope in action! Wearing one of her many gorgeous coats, pregnant Kerry Washington was spotted on-set and showing just a hint of a baby bump while filming season 3 of her hit show Scandal in Los Angeles on Dec. 9.

The 36-year-old star is expecting her first baby with her new husband, Nnamdi Asomugha, and is around six months pregnant and due this spring. The very private Washington has stayed mum on her pregnancy news and has stuck to wearing loose dresses that hide her baby bump.

“ABC has trimmed Scandal‘s season 3 episode order from 22 to 18,” reports TVLine.com. “The network gave no official explanation for the cutback, but it’s safe to say the decision was made in response to the real-life pregnancy of leading lady [Kerry].”

Next up: Pregnant Emily Blunt shows off her baby bump in a peplum top