Your OB or midwife will likely have routine prenatal tests they administer to everyone — but some moms decline these. We talk with moms to find out why, and experts on what they would recommend. 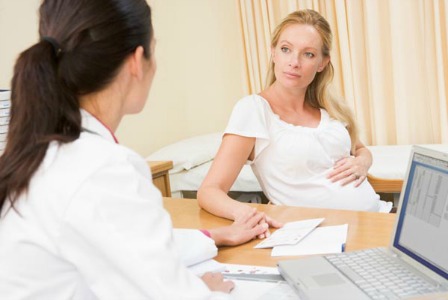 Pregnancy isn’t a health emergency for most women, but routine prenatal care can really help pinpoint potential problems and treat illnesses that can crop up for some. However, some moms-to-be don’t want to subject themselves to certain kinds of tests. We talk with an obstetrician, as well as moms, to find out more.

Dr. Erika Nichelson, DO, OB/GYN, that practices at Mercy Medical Center in Baltimore, Maryland, was on hand to answer a few questions about the importance of prenatal tests. Her practice routinely orders prenatal tests, similar to other doctors’ offices all over the country. “We traditionally order blood type and a screening for antibodies,” she explained. “This is important as some antibodies in the blood can attack the baby’s blood and lead to death. We check a blood count to see if the patient is anemic. This is important because you want to be sure you perfuse the placenta and as a result, the baby. We check for infectious diseases — gonorrhea, chlamydia, HIV, hepatitis, syphilis — as we can give medications to treat in the case of syphilis, and help prevent transmission as in the case of HIV. We check a urine culture to see if there is a UTI [urinary tract infection], as UTI can lead to preterm labor.”

There are also other tests that her practice recommends, such as screening in the first or second trimester for genetic problems, commonly known as the triple or quad screen. Also, at around 24 to 28 weeks, they screen for gestational diabetes. “This is very important as there can be very bad outcomes in poorly controlled GD,” she told us.

One common test that is declined isn’t really a test, but more of a check. Doctors and midwives will often offer to check the status of your cervix as you pass through the last few weeks of pregnancy. While it can be interesting to note if your cervix has started dilating, it really offers no valuable clues to you nor your care provider about when labor will start. Some moms go into labor a day after they’ve been determined to be a “fingertip” dilated, while others will walk around 4 or 5 centimeters for weeks.

Fewer tests for this mom

Some moms felt that the amount of testing they had with their first pregnancy was too much and scaled it back with subsequent gestations. “With Ella I did everything ‘normal’ up until 20 weeks,” shared Brittany, who is expecting her second child. “The more tests I had, the more stress it was on me. It was like one test would lead to three tests that would all come back normal, but they still wanted a fourth test. It was exhausting. With this pregnancy we’re pretty much doing the bare minimum. I haven’t had any ultrasounds, my blood work was done nine months ago so I’m not even getting blood work, no gestational diabetes test. I’ve done it both ways, and I prefer the less stressful way with my midwife.”

The importance of preparation

On the other hand, some moms gained powerful information during pregnancy that helped them cope with challenges that were to come after their child’s birth. Lisa, whose second child has cat eye syndrome (a chromosomal disorder), did all recommended tests during that pregnancy, which came back normal, but she was concerned because they could never get a good view of her baby’s heart.

“It wasn’t until I pushed further that I had a fetal echocardiogram, which identified his heart defect,” she told us. “From there, we went on to have an amniocentesis which eventually led to his diagnosis — in the end, that was super helpful and important knowing before he was born.”

Knowing beforehand gave Lisa and her family some serious peace of mind prior to his birth. “I had lots of time to grieve before he was born so that when his birth came, there were no real surprises other than the good ones and I think it made all the difference in my care for him,” she shared. “It took me a long time while pregnant to come to peace with the idea that I was not going to have a normal newborn experience. I can’t imagine traveling that roller coaster right after giving birth.”

Dr. Nichelson echoed Lisa’s sentiment — that most parents don’t do genetic testing because they’d terminate. Instead, they cherish knowing, and preparing, before their child is born.

Whatever decision you make, Dr. Nichelson wants to make sure her patients know the benefits of prenatal testing and what risks are involved before they make a final decision on whether to decline or not — and this includes what risks there are to the baby if testing is not done and there is indeed a problem. She agreed that it is a personal decision, but hopes that parents communicate with their care provider so they can work together to make the best decision for their family.

Is your maternity health insurance adequate?
Limiting obstetric ultrasounds
Should you have a baby shower for a second pregnancy?

13 hrs ago
by Nicole Witt