Happy Wednesday Hump Day, also known to us as Celebrity Baby Bump Day! We have rounded up the cutest pregnant celebrities of the week, including pregnant Rachel Zoe who was spotted looking stylish as always in a furry jacket. Megan Fox showed off her baby bump — and her cute son Noah. Drew Barrymore, Kristin Cavallari and newly pregnant Evelyn Lozada round out our list of the cutest pregnant celebrities of the week. 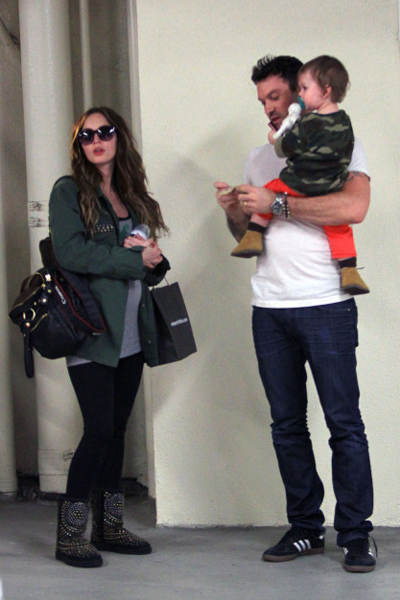 Pregnant Megan Fox stepped out with her husband Brian Austin Green and their son, 14-month-old Noah, as they left a pediatric dentist in Beverly Hills on Nov. 26.

This is actually one of the first times the couple’s cute son Noah has been spotted out in public.

“He loves to be the center of attention and I also think he is a really sensitive child,” Fox told People.” I think that he’s going to be a nurturer. It’s a lot to expect, but he’s only 14 months now. I think he’s going to be an amazing big brother with time.”

Fox said she has also been preparing Noah for the arrival of a sibling. “We are trying to explain it to him and I always say, ‘The baby is going to say, “Wah, wah, wah,” because he is not communicating yet [so] I’m not sure how much he understands,” she said. “I know as far as everything else goes, he’s really aware. So I think he has an idea, but I don’t think he understands that a baby will be living with us all of the time — that will be an adjustment.”

Next up: Rachel Zoe shows off her third trimester style