Happy Wednesday Hump Day — also known to us as Celebrity Baby Bump Day! We have rounded up the cutest pregnant celebrities of the week including Kristin Cavallari, who debuts her baby bump in skinny jeans and a tee. Pregnant Kim Zolciak showed off her huge twin baby bump (due this month!), while pregnant celebs Rachel Zoe, Gwen Stefani and Brooke Anderson round out our list. 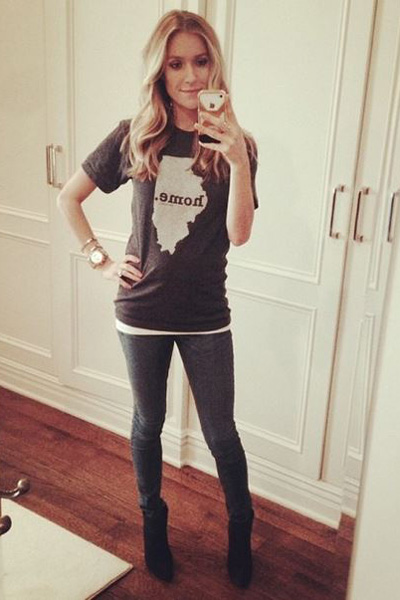 Pregnant with her second child, Kristin Cavallari shared this photo on Instagram of her wearing “The Home T” shirt which showed a hint of her baby bump. She paired the gray tee with skinny jeans and booties.

“Early holiday gift from @peoplestylewatchmag! “ wrote Cavallari. “Check out this @thehomet and more great gift ideas in the December issue on sale Nov. 22! A percentage of the proceeds from sales go to multiple sclerosis research.”

The 26-year-old former Hills star and her boyfriend, Chicago Bears quarterback Jay Cutler, recently announced they are expecting their second child together. They are already parents to 14-month-old Camden.

“We are so excited for Camden to be a big brother!” she tweeted.

Back in September, Cavallari told E! News that she was ready to get pregnant. “We’re working on it!” she revealed.

“We know we want another one close in age to Camden and we’re at the point where we’re both ready. Before Camden was born, I thought I’d be pregnant again by the time he was six months, but I definitely wasn’t ready. Now, I’m finally ready,” she said.

Next up: Pregnant Kim Zolciak shares photo of her HUGE twin baby bump

16 hrs ago
by Angela Johnson

18 hrs ago
by Angela Johnson