What was on the minds and Twitter feeds of some of our favorite celebrity moms this week? After keeping her daughter North West off of social media since August, Kim Kardashian shared two new pictures of her cute daughter, while Julie Bowen tweets about celeb mom Rachel Zoe. Fergie and Melissa Rycroft round out our list of the top celebrity mom tweets of the week. 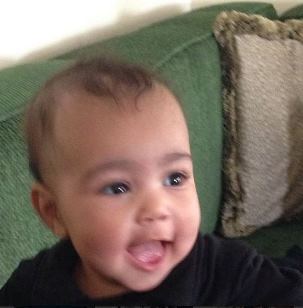 The social media savvy Kim Kardashian has surprisingly kept her daughter North West absent from Twitter, last sharing a photo in August to help promote her mom, Kris Jenner, and her now-canceled talk show… until now!

Kim shared this cute photo of 5-month-old North giggling as she sat on a green sofa, with the caption “LOL.”

Many of Kim K’s followers thought her daughter looked like daddy Kanye West!

Kim also shared another photo of North that same day, with the creative director of Givenchy, Riccardo Tisci, holding her, with the caption”#NewStylist.” In case you were wondering, Givenchy is the designer brand that dressed her when she wore that floral dress while pregnant at the MET ball.

“moms- do u ever want to wake up your baby to give him or her kisses? i want to soooooooo bad right now, but she’s so peaceful sleeping,” she tweeted. 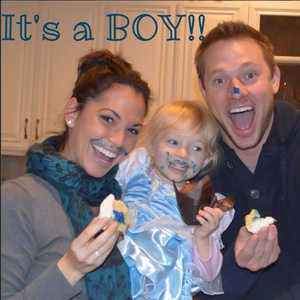 “Guess what we’re about to find out?! Here’s what the Old Wives Tales are saying…What do you think it’s going to be??” tweeted Bachelor alum Melissa Rycroft this week. Rycroft and her husband, Tye Strickland are expecting their second baby together and she shared an Instagram picture of a chart of “Common Gender Prediction Myths.”

According to the chart, she and Tye should have been pregnant with a girl — so, were the myths correct?

Nope, they weren’t! “It’s a boy,” wrote Rycroft on Instagram, sharing this photo of her and Strickland holding their 2-year-old daughter Ava. All three of them had blue icing on their faces while Rycroft accessorized with a blue scarf.

In the meantime, Rycroft shared some of her pregnancy cravings on her timeline. “Made Tye go pick up dinner because I can’t stop craving Bloomin’ Onions….! Oh boy…this could be a long couple months if this keeps up!” she tweeted.

It also sounds like she is already preparing for the sleepless nights with a newborn baby. “1 pregnant woman + 1 large grown man + 1 bad-dream-having toddler + 2 dogs = 1 very full bed, and 1 very long night….Too bad this is Decaf,” she wrote.

Modern Family star Julie Bowen (AKA Claire Dunphy) is just as hilarious on Twitter as she is on TV! Bowen, has her hands full with three boys, 4-year-old twins John and Gus and 6-year-old Oliver.

Bowen re-tweeted a post by celebrity stylist Rachel Zoe, who shared this picture of Zoe, Bowen and Michelle Monaghan at the Baby2Baby event. Bowen responded to the tweet by writing, “Rachel Zoe knows who I am! I DIE!” 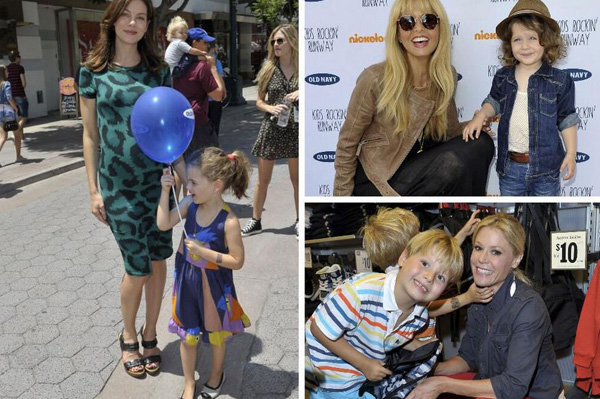 Also on her timeline? “Spent the day at the pumpkin patch with my boys. Minus the emergency pee in a water bottle, not a bad day at all,” she wrote.

“I heard you got nude for a new R-Rated Dramedy,” one fan asked Bowen via Twitter.

Her response? “After 3 kids, I don’t get naked in the shower. #unlikely.”

”I kind of wish I was @itsJulieBowen,” tweeted another. 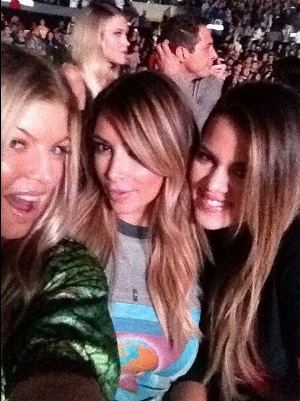 Who knew Fergie was friends with the Kardashians?

“Mommy bonding w/ @kimkardashian. @khloekardashian u crack my shiz up gurrl!!” tweeted Fergie, sharing this photo of the three of them at the Kanye West and Kendrick Lamar concert.

She also posted an adorable photo of baby Axl as she wished her husband Josh Duhamel a happy birthday.