Many moms of children with Down syndrome can tell you the moment they either started or stopped seeing their child’s Down syndrome characteristics. The tiny ears. The slanted eyes. The small, button nose and tongue protrusion. It’s completely natural, and those moments can pop up when we least expect them. 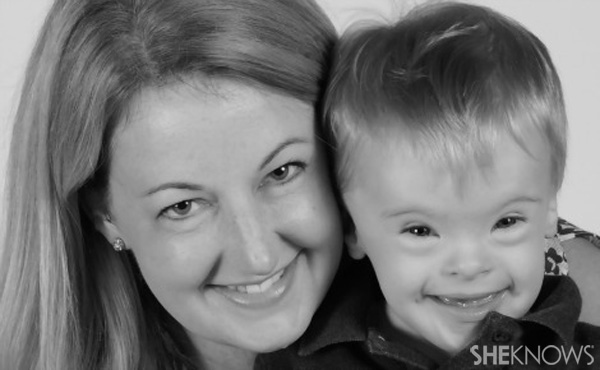 We received a prenatal diagnosis of Down syndrome (Ds) for our son, Charlie. For me, that meant months of pretending I was fine publicly while falling apart privately. I blamed myself. I thought my son would never have “real” friends. I anticipated the bullying and name-calling.

My husband reacted exactly the opposite. He joined the local DADS group (Dads Appreciating Down Syndrome) before we even had an official diagnosis (he’s what you’d call proactive). He wanted to know as much about what we could expect as possible.

I wanted to crawl under the covers. I couldn’t look at pictures of children with Down syndrome — all I saw was their physical differences, and in my ignorance, I worried that was all anyone else would see.

The reality of meeting my child

Then Charlie arrived at 33 weeks and spent a month in the NICU. I was with him every day and spent hours cradling him and memorizing every square inch of his beautiful face, tiny hands and intoxicatingly cute feet.

I kept trying to “see” his Down syndrome but never could, aside from recognizing that his tongue protrusion was because of the extra chromosome.

Now, when I look back at baby pictures, sometimes Down syndrome is all I see, and I have mixed emotions. I want so much for others to see Charlie first, not the characteristics of Down syndrome that are visible. But then I think if it’s what I’m seeing, how can I be upset when others notice, too?

Timing varies for everyone

Each mother’s experience varies. For some, the moment of actually “seeing” their child’s Down syndrome came when they had another child without Down syndrome. Suddenly, the differences popped out and they found themselves obsessing over what others could see and what others focused on.

The heartbreaker is that we all strive so hard to help society see past our child’s extra chromosome. So what does it mean when suddenly it’s all we can see?

“Not uncommonly, new parents sometimes don’t begin to notice the features of Down syndrome until well after the birth of their child,” explains Dr. Brian Skotko, co-director of the Down Syndrome Program at Massachusetts General Hospital.

“This is not to say that the features were not always there, they just were not important. Parents noticed their baby first. Their miracles. Their celebrations. They were focused on feeding, changing diapers, trying to do the right thing while sleep deprived.

“But, as parents begin to do their homework, reading up on Down syndrome and engaging with other parents and the advocacy movement, they often begin to ‘see’ the features of Down syndrome that were evident to us physicians from the beginning.”

Some parents found solace in the characteristics they did recognize. “When my [son] was born, the doctors said he had certain physical ‘markers’ for Ds,” shares Beth. “The only one I saw, clear as day, was the extra skin on his neck.” (Slightly thicker skin at the neck is a common marker for Down syndrome.)

“I quickly became attached to it,” Beth says. “I secretly feared there would be someone in the world who wouldn’t love him because of his Ds, and that skin represented the Ds to me. So as I loved on him, I loved kissing, nuzzling, and stroking that soft skin on his neck. It was soothing to me. In a time of feeling such uncertainty, I was determined to love every part of my baby.”

Struggling to see through physicians’ eyes

Other parents share how difficult it was to see any physical traits of Down syndrome right away.

“I really did not ‘see it’ for a very long time,” shares Tamara. “The pediatrician that came to the hospital had him sitting up checking him and yes, [my son] was floppy, but he was my first and only child. I thought they were all floppy.

“I was shocked when the doctor said we needed to have him tested. During the 3 weeks it took to get in with the geneticist I tried to see it — [I thought] they must be wrong…

“Even after [doctors] showed me the results, I still couldn’t see it. There are some traits that have become more prominent as [my son] has gotten older and he has always had the extra space between his toes. I tell him that he was made for flip-flops and that is my shoe of choice almost year round!”

Jill’s son was whisked away from her immediately after his birth. “The nurse practitioner came over and took my hand and told us she thought he had Down syndrome. We hadn’t even held him yet.

“[My husband] and I have talked about how although it was really soon and sudden, we wouldn’t change the way we found out because there wasn’t really any time after he was born when we didn’t know about the diagnosis… I didn’t see the diagnosis when I did finally hold him or in the days later. Even looking back at his baby pictures I don’t really see it and I don’t see it on a daily basis.”

Introduced to traits before baby

For other parents, their first experience holding their child was overcome by their focus on the Down syndrome markers.

“Minutes after birth, before I saw [my daughter], the nurse practitioner notified me of her ‘suspicion,'” Sandy says. “When I got to hold her, the first thing I saw was the Ds. The eyes, the mouth, the fingers. That’s all I could see. And that’s what I told my baby… ‘Yeah… you do have it.’

“Looking back at pictures from birth I realize how beautiful she was. How perfectly formed she was. Actually, I don’t ‘see’ Down syndrome in those pictures yet I saw so much of it then,” Sandy shares. “It was the fact that I was told she had it before I saw her — it shaped my view.”

“Parents should know that this is OK,” Dr. Skotko says. “People with Down syndrome do look differently than the rest of us. But, that doesn’t make them any less important, any less valuable. Physical differences are just one of the many ways that we humans are rich in diversity — and that’s cause for celebration all over again.”

The irony of seeing it ourselves

Like me, many parents of a child with Down syndrome advocate for equality and want others to see our children as children first, even though their physical traits may be distinct.

Some parents admit they struggle with pictures, preferring shots of their child that downplay the physical traits of Down syndrome.

“I notice the Ds characteristics but he has them, so I don’t feel bad for noticing,” Sara says of her son. “I will say that when I take pictures of [him], I tend to not like the ones where his tongue is out or his mouth is open. I feel like in those pictures I see the Down syndrome more than him, and so I try to get only the smiles or his personality.

“In those cases I do feel guilty, it’s not like I’m trying to not see it, but I don’t like the pictures that showcase [his Ds traits]…. and I don’t like that I feel that way.”

Jill says sometimes she’ll come across a picture of her son and notice the Ds characteristics. “Is this because my head and my heart choose not to see them or is it because his characteristics are mild? I’m really not sure, to be honest. All I know is that to me, he’s the most beautiful child there ever was and I think that’s the way it’s supposed to be.”

Jenna couldn’t see her son’s Ds traits when he was born, but today, “pictures are where I ‘see it,'” she says. “We knew prenatally, so as soon as he was born I was trying to see it, but didn’t.”

She says they didn’t notice until her son was about 9 months old and his tongue protrusion increased. “Now we take tons of pictures to try to get some with his tongue in,” she says. “For some reason when we are outside, it’s the worse… because he likes the way the wind feels on his tongue. But I’m partial because I do believe [my son] is beautiful! Everyone we come in contact with says, ‘He is so cute!’ Do they know? [It’s] a question I always wonder.”

Sandy, who received her daughter’s Down syndrome diagnosis before she had a chance to hold her, takes the same approach with pictures for all three of her children. “Now, at 17 months, I rarely ‘see’ [my daughter’s Ds traits]. I find her beautiful. But, like with my other two children, I’m cautious of the pictures I save and post. I want her best pictures. And yes, that means no pictures where her tongue protrudes ‘too much.’ I want others to see past the Ds and see how truly beautiful and smart she is.”

“If I have a fear related to people noticing [my son] has Down syndrome, it is that they would assume things about the diagnosis and underestimate him,” Jill explains. “He’s so bright in all ways, and if you know him you know he won’t be underestimated so I’m not sure why I worry.

“I do wonder sometimes if strangers notice, if they wonder why he talks less. I rarely get questions from adults, which makes me wonder. Kids are more quick to ask questions, but they’re usually based on his speech, not his facial features.”

Tamara is startled when strangers acknowledge her son’s Down syndrome. “When [he] was older, I was actually shocked when someone else commented on [him] and Down syndrome! Seriously, there were times when I would look at [my husband] and say, ‘How did they know?'”

Larina has an opposite view. “I’ve always presumed that every single adult who sees or meets [my daughter] knows that she has Ds. It wouldn’t have occurred to me (until right now, actually) to think that it was not obvious to an adult. However, I am never sure what other children are thinking… and I’m curious about the age at which they start to piece things together.”

“When it comes to the playground, parents should realize that young children do not readily recognize the features of Down syndrome,” explains Dr. Skotko. “They see another playmate. They see people first, not labels. Adults, especially the ones who see only the differences, should take lessons from these younger teachers.”

Read more about children with Down syndrome

The link between Alzheimer’s disease and Down syndrome
Down syndrome: Is awareness overdone and action overdue?
Divorce: Does “Down syndrome advantage” exist?