Forget the stereotype of the minivan-driving, mom jeans–wearing woman whose life revolves around shuttling kids to and from soccer practice. We asked three women to give us the inside scoop on what it really means to be a soccer mom. 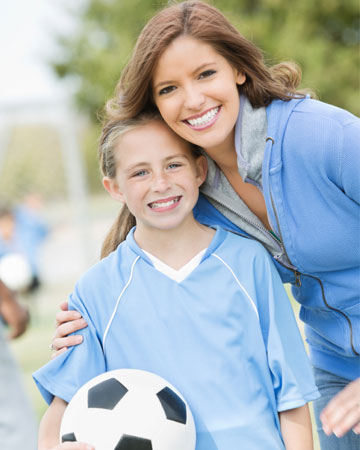 First things first: Just because your kid wears a shiny uniform and kicks a ball into a net doesn’t mean you’re a frumpy, middle-aged mom with your rear end molded to the seat of your minivan. OK, so maybe most soccer moms don’t wear stilettos to the game, but we just want to clarify that today’s soccer moms — especially the three we interviewed — are dynamic women who don’t fit any stereotype. The things they do have in common? Their kids play soccer, and they love it!

Ashleigh Kruk, whose husband Michael is the coach of 6-year-old son Cooper’s soccer team, says soccer has been a wonderful family event.

“Cooper loves having his daddy coach, and it creates great father-son memories,” she says. As for her own involvement, Kruk says being a soccer mom is a privilege, “just as being any sort of a mom truly is.”

Liz Mathis says it’s a big plus for her 8-year-old daughter Allison to have the whole family rally around her on game day. Sarah Root, whose husband Chuck coaches their 5-year-old twin daughters, agrees that their family’s involvement in the sport is beneficial for all.

“For my husband, it’s more quality time that he gets to spend with the kids and their friends,” Root says. “It is also exciting for him to share one of his favorite pastimes with them.”

Teamwork for the kids — and for the parents

Root says soccer has given her kids an introduction to being part of a team and having others count on them to do their best.

“They have grown more confident in their abilities as the season has gone on… It’s great to see them feel pride when their team wins and also learn to be good sports when they don’t,” she says.

And it’s not just the kids who work as a team during soccer season. The parents must come together to support the players, too. Kruk says that since her husband is the coach, she figures it would be a bit of overkill for the other players’ families to have her family running the whole show. She usually waits and lets other parents step up for the duties after her husband sends out a request for volunteers. One parent handles the weekly snack schedules, another is in charge of picture day, another takes care of trophies and another organizes the end-of-season celebration.

In her experience, Kruk says the support and help that comes from the team as a whole creates a “really neat team environment for the families as well as the players.”

Mathis agrees, saying she tends to step back since her husband Perry is the team coach and this is his “gig.” She focuses her efforts on taking practice and game photos to post on the team’s photo-sharing site.

“Photos are the most fun!” Mathis says.

“The physical activity is fabulous, especially because it is so much fun that the kids hardly realize how much exercise they are actually getting!” says Kruk.

Healthy snacks are also a big part of soccer.

As the “team mom,” Root says she provided the first game-day snack to set the precedent of bringing “something healthy and something a bit more fun.”

Her snack included orange slices and a healthy granola bar, along with a low-sugar juice box. So far, she says the other parents have followed suit. Mathis and Kruk say their teams also enlist parent volunteers to bring healthy snacks — fruit like oranges, apples, bananas or grapes at halftime and a beverage and snack-type treats like yogurt, bars, cheese sticks, cracker packs or muffins for after the game.

While the media may fault soccer moms for putting their kids first, all three of these moms appreciate this special time in their lives — because before they know it, all the frantic searches for shin guards, the slicing of oranges and the early mornings on the field will be nothing but memories.

“It’s a stage in life,” says Mathis, “and I’m thankful for the time with my soccer player.”