Happy Wednesday Hump Day — also known to us as Celebrity Baby Bump Day! What was in the water in Hollywood this week? We have a whole new crop of pregnant celebrities, including Scandal star Kerry Washington, who dressed her baby bump in a black floral dress as she hosted Saturday Night Live. Newly pregnant Kristin Cavallari was spotted in a pretty peach dress, while Drew Barrymore revealed her baby bump for the first time in a flowing frock. Olivia Wilde and Gwen Stefani round out our list of the cutest pregnant celebs of the week. 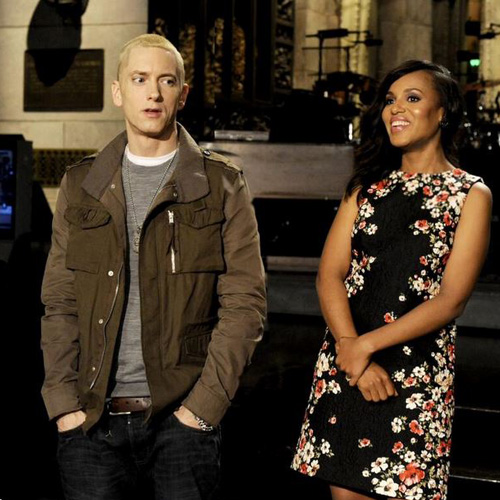 No scandal here! Actress Kerry Washington and her new husband, NFL player Nnamdi Asomugha, are expecting their first child together. The pregnant star, pictured here with musical guest Eminem, hosted Saturday Night Live this past week and kept her baby bump under wraps in a loose-fitting black floral dress. The 36-year-old Scandal star is reportedly around four months along.

Washington and Asomugha were married in June in a super-secret ceremony, in a move that would have impressed her character Olivia Pope. Don’t expect Washington to talk much about her baby news either, as she told Glamour that talking about her personal life “doesn’t work” for her.

“I’ve had earlier times in my career when I did talk about it,” said the Django Unchained star. “But I couldn’t just turn around and say, ‘I only want to talk about the good stuff, but not the bad stuff.’ So I just thought, ‘Okay, no more.'”

Washington, who met the former San Francisco 49er in 2012, was previously engaged to actor David Moscow.

Next up: Newly pregnant Kristin Cavallari is pretty in peach