As children grow from babies to toddlers, moms and dads have to decide if Santa Claus will be part of their family’s holiday traditions. These moms share whether they do Santa Claus or not, and why. 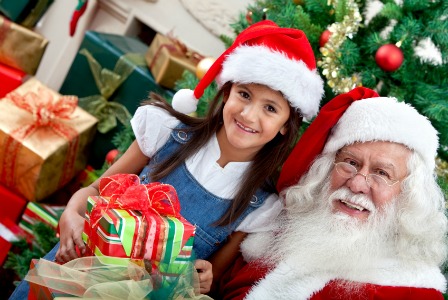 Santa Claus has roots that go back generations, all the way to the 4th Century and a man who would eventually be known as Saint Nicholas.

A Greek bishop, he became well known for his generous gifts to the poor. The early image of this gift-giver from church history, combined with Dutch and English folklore, formed the concept of modern-day Santa Claus. The tradition of Santa Claus, then, is a strong one, but as with many parenting decisions, it’s not immune to a controversy of its own. We asked moms if they did Santa, and the answers were as varied as the families themselves.

Many moms who do Santa Claus want to recreate the magic of their own childhood, or start new traditions with their kids. Cathy is one of those moms. “We do Santa because I think there is such a small window where Christmas is so magical,” the mother of two told us. Charlene from New York agreed. “Heck yes!” she exclaimed. “I have amazing memories of Christmas and Santa as a kid and I want my kids to have that. It’s such a magical time, even now as an adult it still feels that way.” And Talei, mom of two, had similar experiences. “I do it because I have fantastic memories of Santa and Christmas as a child,” she shared.

Other moms preferred to stay honest about where their presents come from each holiday. Kelly’s family doesn’t do Santa because they prefer to keep focused on their religion, but she admits there is another compelling reason they don’t do the jolly old elf. “I don’t want to lie to my kids,” she shared. “However, we talk about Santa a lot, and tell them that he was a real person, and now we all do the work that Santa used to do. “

Some parents, whether they do Santa or not, don’t go for the idea that a child’s behavior will dictate what they will or won’t get on Christmas morning. “I hate when parents use Santa as a good behavior tool,” explained Amy, mom of three. “Kids know that they will still get presents, so it is an empty threat and doesn’t work, or it shows them that the bad behavior really isn’t going to hurt them. Kids need to obey and listen the first time regardless of the season.”

Kelly, whose family doesn’t do Santa Claus, doesn’t feel this fact diminishes her kids’ experiences in any way during the holiday season. “I think Christmas is still magical without Santa,” she told us. “I know a lot of people think my kids are missing out, but I don’t think they are missing out on anything. The air seems to change around Christmas time, I love it.”

No matter what choice you make, you can still make Christmas amazing for your children each year as you celebrate with friends and family.

More on the holiday season