Circumcision is a hot topic, but it can be even more controversial within your own family — particularly if Dad is circumcised but you don’t want your baby to be. We talk with families and experts alike about this personal topic. 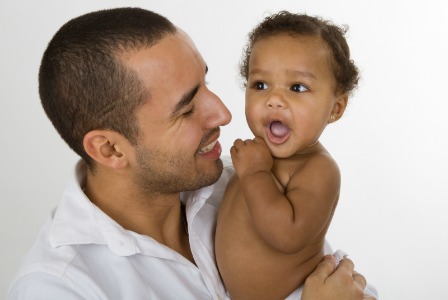 One of the arguments against leaving a baby uncircumcised is that he won’t look like his dad — after all, circumcision rates were higher when we were babies than they are today. But when you think about putting your newborn son through a medical procedure to remove healthy tissue he was born with — for strictly cosmetic reasons — you might start to wonder if it’s really necessary.

We talked with moms who made a different choice than the father’s parents, and what it was like for them as they made that decision.

Circumcision was more common in past decades than it is today, but making the decision to leave a baby boy intact is now becoming more prevalent as more parents realize that it isn’t a necessity. Pediatric urologist Jennifer Singer, M.D., associate professor and director of education at UCLA Medical Center Urology, was on hand to answer a few questions about the unique challenges parents face when Dad is cut, but Baby won’t be. “I inform families that over time, circumcision rates have consistently and steadily declined and that more and more families with circumcised fathers and brothers are electing to forgo circumcision for their newborn boys,” she explained. “Consequently, we are seeing an increase in uncircumcised boys in families with other circumcised members. When families elect not to circumcise boys in families with circumcised members, I encourage a discussion about the normalcy of the uncircumcised penis.”

Learn why parents are choosing to leave their sons intact >>

Many parents we spoke with had initially planned on circumcision, but changed their minds near or after the births of their sons. “Before I had Parker we planned on circumcising if we had a boy, because Matt was circumcised as well,” shared Janine, mom of two. “My mind completely changed once he was in my arms. I couldn’t imagine changing him or inflicting unnecessary pain on him just so him and his father were the same. Matt agreed that he should be kept intact. Sure, I may have to explain why they are different, but I imagine it won’t be a big deal.”

Liz, who lives in Australia, pondered the question of comparing penises when she and her husband welcomed their son into the world. “It was not a big deal at all for us,” she remembered. “I think we briefly had the ‘wanting him to look the same’ conversation, and when I asked how many times he and his dad compared penises, it ended pretty quickly. One of our midwives or doctors also told us that only about 10 percent of infant males are circumcised in Australia and there is no medical necessity for the procedure, [then] we knew that we were making the right decision.”

Other moms reported that the decision was an easy one in their family. Some dads felt that their own circumcision should have been left up to them, like Hurley’s husband. “Before we found out Turtle was a girl, we had the conversation,” she said. “When I asked Erich what he thought about his mom getting him circumcised at birth he said, ‘There’s nothing I can do about it now, but I wish I had the choice for myself.’ That pretty much settled it.”

And Kimmy, who just found out she is expecting a son, had zero opposition from her husband. “I said, ‘We aren’t having Wolfie circ’d.’ and Eric said, ‘Sounds good.’ The end.”

Circumcision is an important decision. Research it as much as you can before your baby is born, and if you’re still undecided, wait — you can take the foreskin off, but you can’t put it back on if you change your mind later.

More on baby and toddler care