Dads have seriously stepped up their game in recent years. 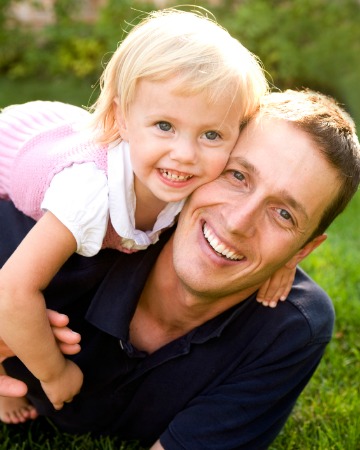 I know plenty of stay-at-home dads, fathers who do middle-of-the-night feedings without complaint and dads that pick up some serious slack when mom is suffering from raging morning sickness (shout-out to my husband).

Obviously, family roles have changed for the better because now many more kids grow up with two involved parents instead of one. Girls who have a solid bond with Dad are likely to have higher self-esteem, too.

However, there are some things that just don’t change with time, or at least, haven’t quite yet. Here are 10 free passes dads get that moms don’t.

They don’t have to puke their guts out to create the miracle of life. In fact, their role in that whole thing is really quite small. Now, seahorses — those guys are really on to something.

They don’t have the stress of breastfeeding. Though they can definitely play a part in the feeding process by giving baby a bottle of expressed milk or formula, they don’t have to deal with sore nipples, clogged milk ducts, leaky boobs, slipped nursing pads resulting in soaked T-shirts and the emotional drain that moms know all too well.

No one wonders where they are if they can’t make the PTA meeting. It’s true. If mama isn’t present at a school event, fellow parents are likely to be heard whispering, “Where’s is she? Is she sick? She must be sick!”

When his child enters the world, a man’s parts remain fully intact. Ours… well, can usually be repaired with minor surgery.

Dads usually get to poop in peace. Moms know pretty well that their trips to the bathroom — whether it’s number one or number two — are usually a spectator sport. They do it while answering questions, wiping runny noses and sometimes begging for just one moment of privacy. For some unknown reason, dad is often allowed this luxury. Yes, I said luxury.

Likewise, they get to shower without someone pooping next to them. I don’t know what it is about the times which I choose to shower that seem to make my daughter frantically need to poop. Every. Single.Time.

And while we’re on bathroom talk, dads generally don’t start peeing their pants till much later than us ladies. Thank you, pregnancy and childbirth. #teamincontinence

No one cares if they feed the kids dinner out of a box. “What a doll for doing the cooking!” they’ll say. And by “they” I mean, my grandmother.

Most of them get to avoid the stage-five clinger mode. I’m amazed at how much my husband can get done when he’s home. It’s not because he’s more efficient than me. It’s because there’s not a tiny person glued to his leg, his hip or climbing in his lap the entire time.

Their screw-ups are easily forgiven. My husband is a great dad, but I swear, he’ll so much as look at my daughter and get complimented on how attentive he is. And if he screws up, we hear, “Oh, he means well! He’s trying so hard!” If fellow moms gave each other half as much credit, it’d be a whole new world, ladies.

10 People Dad should know at school
Simple ways for Dad to bond with Baby
The man at home: What some still don’t understand