As soon as my daughter was born, people started asking us where she would go to preschool. “Um, I have no idea. Isn’t it way too early to worry about?” I thought. 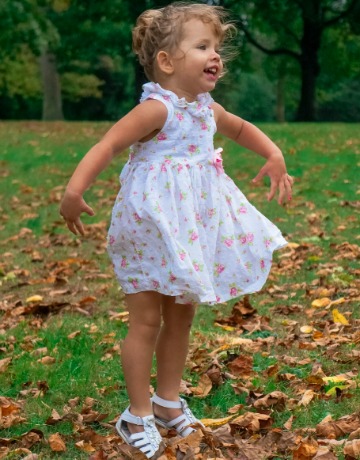 It seemed too far off and I had bigger fish to fry, like running a comb through my hair or maybe eating half a sandwich without interruption.

As the time neared to look into some sort of schooling, which only became important to me as my daughter began to crave socialization, I noticed how many parents were concerned with their kids “getting ahead.” On the playground I’d hear moms talking about how their kids knew the alphabet, how to count to 20, etc. All around me, people seemed so concerned with how much their kids knew, rather than how happy they were.

Letting a kid be a kid

I knew people with 2-year-olds who would sit and quiz them on numbers and letters. While I didn’t exactly think it was harmful (at the time) I just thought it seemed like a waste of time and energy. All the while, we were just busy getting dirty and having fun. Almost everywhere I went people told me how (for a 2-year-old) my daughter spoke skillfully. Her pediatrician pointed this out at her 2- and 3-year-old visits. Heads turned when her 2-year-old mouth blurted out a full sentence and they would say, “How old is she?”

While it was nice to hear, maybe even a little boost to my parental ego, it’s even nicer to know that her language skills developed on their own by talking, playing and socializing rather than my quizzing her on vocabulary over dinner. Just by watching a child be a child, it’s clear they are learning by doing on a constant basis. While I’ve surely spent a lot of time answering questions, I’ve never tried to push her into a formal learning situation once in her life.

So when my husband and I began to look into schools, we thought that we might go a less traditional route. While I don’t want to project my past experiences on my daughter, I remember hating school from elementary on. I remember counting on my fingers, how many more years do I have left of this? I didn’t like sitting at a desk all day. I got in trouble for talking out of turn. I remember being bored and disengaged often. Though I got good grades, I was unhappy in my school experience from just about the very beginning. My husband had a similar experience. It seemed somehow our enjoyment of learning had dissolved quickly when we reached school age. I didn’t want that for my child.

I looked at my daughter, then 2 years old and a sponge. She loved making blades of grass talk to each other, asking questions, looking through books, playing in the mud, painting pictures and helping us cook. She was unintentionally learning all the time just by being alive and free. I worried about taking that joy of learning away from her by forcing her into a formal learning situation when she wasn’t ready. Shouldn’t she be allowed to just be a kid? If not now, when?

The sooner the better?

I started to do my research. I found out that the push for early accelerated learning was even more prevalent in most public schools than it was when I was young. Schools seemed to believe that the sooner they taught something, the more it would become ingrained, even when research showed the opposite. Many fellow parents told me that their kindergarteners had an hour or more of homework every night after all-day school. A close friend complained they couldn’t get together for a play date because they were working on his 5-year-old’s science fair project all weekend. I heard stories of 7-year-olds frequently coming home in tears, stressed and overwhelmed. While that surely had happened to me plenty in my younger years, it wasn’t until about middle school that I remember feeling that overly stressed.

While most preschools I looked into boasted children would learn ABCs and 123s, I wasn’t impressed. It seemed to me that teaching a child something at an age-appropriate time was a far better idea than “the sooner the better.”

While my kid loved to talk and tell stories, she definitely wasn’t interested in that kind of structure — and why should she be? Wouldn’t the child grasp something with far more ease and understanding if it was taught a bit later? What is the rush? To boost our own egos? To impress the pediatrician or moms at the playground? To ensure a scholarship at any price?

I didn’t know the answer, but it seemed to me that putting that kind of stress on young children can only be problematic. Isn’t it naïve to think that type of teaching doesn’t affect them on an emotional level? I’d already been through the system and remembered the stress. It was real then and from everything I read, heard and saw, the pressure for kids had multiplied. I understand that parents are worried about college and teachers are worried about test scores, but there has to be a better way, I thought. While we surely live in the age of information — and that’s a wonderful thing — I’ve come to believe that we have to pick and choose what we give to children and when.

I started to look into non-traditional schools and that’s when I found Waldorf. Hardly anyone I knew had heard of it and the ones who had said things like, “Isn’t that the school where all the boys have long hair?” or “Don’t send her there, they don’t learn to read until they’re 7!” Her happiness was my top priority. It seemed much more important than any reading level, and so I stuck to my guns.

I found out that one of Waldorf schools’ main goals is to instill a love of learning, rather than to push a child into too much too soon. While most Waldorf graduates actually do attend college — about 93 percent — most of the teachers are more concerned with how a child is doing on all levels, which includes emotional and mental health, rather than just how much they know for their age. The curriculum isn’t driven by test scores. It’s driven by the development of the child and by creating age-appropriate tasks.

My daughter is almost 4 now and her playful spirit is intact. She’s as curious as she ever was and I hope that never changes. While perhaps the stress and structure of schooling in our country can serve some souls efficiently, I’d rather an environment for my child that caters to her whole being. When it comes to my kid, letting her discover who she is will always be my number one priority. I’m happy to have found a school that feels the same. In a world where happiness is often traded in for “getting ahead,” I hope we can realize what we’re asking our kids to give up.

10 People Dad should know at school
Which states are best for homeschooling?
When should kids learn to type?

21 hrs ago
by Rebecca Rakowitz

22 hrs ago
by Rebecca Rakowitz