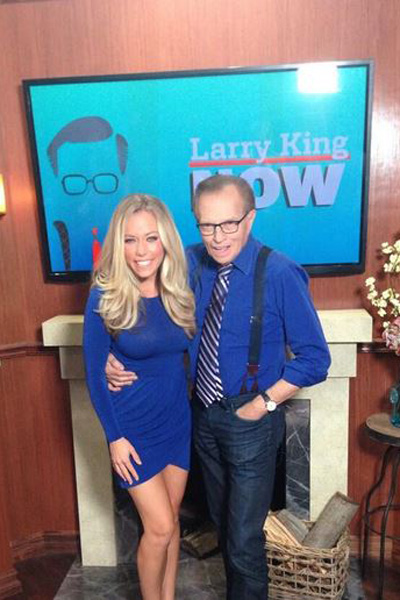 Related story Gwen Stefani Says 'Everything' She Does Embarrasses Her Kids

Former Girls Next Door star Kendra Wilkinson and her husband Hank Baskett are expecting their second child together! Us Weekly confirms that the former Playboy star is around eight weeks pregnant. Their son, Hank Baskett IV, is 4 years old.

Wilkinson has stayed mum on the baby news on Twitter, but did share this photo in early October of her wearing a skimpy blue dress as she posed with Larry King. No baby bump yet!

A source told the magazine that they “have been planning a second baby for a while,” and “are very excited.”

The 28-year-old hinted this summer that she and her hubby were gearing up for baby No. 2. “We are trying, we are going to start now,” she said. “This is my first official announcement! We are very excited about making the decision to try!”

Wilkinson said the upcoming season of her reality show, Kendra on Top, will document the couple’s decision to have another child, which could be the reason she has yet to tweet on her pregnancy news.

“We are shooting my second season of Kendra On Top and we have some answers there if you go and check it out,” she said.

Next up: Gwen Stefani doesn’t hide her baby bump in a gorgeous fringed gown