Happy Wednesday Hump Day — also known as Celebrity Baby Bump Day, where we round up photos of the cutest pregnant celebrities of the week! This week we have two new additions to our list, with the newly pregnant Melissa Rycroft and Kendra Wilkinson. Stylish moms-to-be Rachel Zoe and Gwen Stefani were spotted comparing baby bumps at The Performing Arts Inaugural Gala, while Kim Zolciak, who is due next month with twins, shares her bare baby bump. 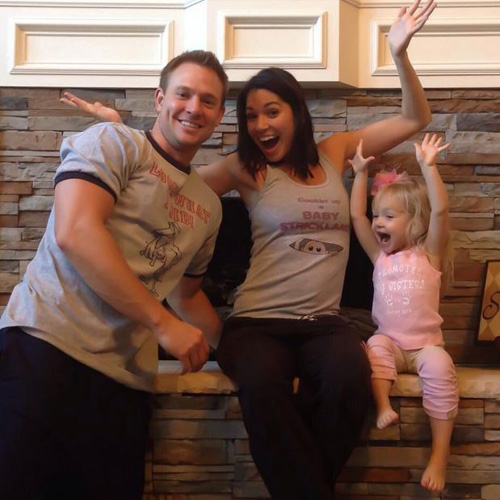 The Bachelor alum and Dancing with the Stars champion Melissa Rycroft just announced she is pregnant and expecting her second child with her husband, Tye Strickland.

The 30-year-old reality star shared this family photo on Twitter, showing off her small baby bump in a tank top that says, “Baby Strickland” while her 2-year-old daughter, Ava, wears a pink “Big Sister” shirt.

“Thank you so much for all the sweet congrats! Clearly, we are very excited to meet the newest addition to the family!” she tweeted.

She later shared a picture of her positive pregnancy test, writing, “Clearly excited to share our big news!!! A new little Strickland will debut this fall! #ClearblueConfirmed”

Rycroft married Strickland, who is an insurance agent, in 2009 — after she was proposed to (and subsequently dumped) by Jason Mesnick on the 13th season of The Bachelor. After picking Rycroft over Molly Malaney on the reality show, Mesnick revealed he was breaking up with Rycroft on-air during the After the Final Rose episode. Mesnick went on to marry Molly Malaney, while Rycroft has clearly moved on to better things, winning Dancing with the Stars and starting a cute family of her own with Strickland.

Next up: Kendra Wilkinson is pregnant again!