Happy Wednesday Hump Day or, as we like to call it, Celebrity Baby Bump Day! This week’s photos of the cutest pregnant celebrities include Emily Blunt, who is finally starting to show. Pregnant Kate Winslet looked radiant in a red gown at her movie premiere, while Kim Zolciak showed off her twin baby bump in a black maxi dress. Pregnant moms-to-be Gwen Stefani and Rachel Zoe round out our list of the cutest expecting stars of the week. 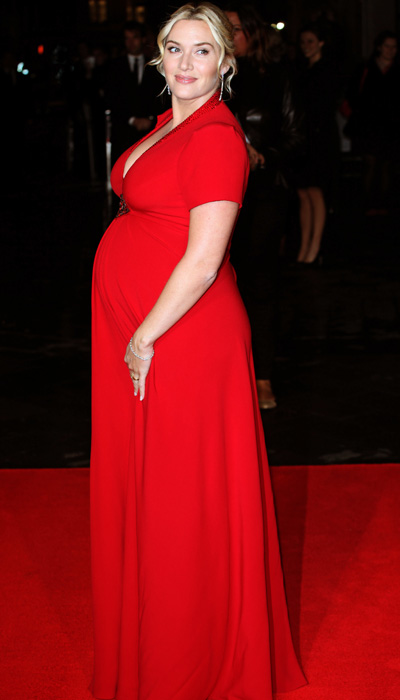 Winslet is pregnant with her third child — however, it is her first with her new husband Ned Rocknroll, who is the nephew of Richard Branson. Winslet has a 13-year-old daughter Mia and a 9-year-old son Joe from previous marriages.

The 38-year-old Oscar winner said she hasn’t had many crazy pregnancy cravings. “At the moment I seem to be wanting orange juice a lot. I don’t know quite why that is, but it’s not so weird. I wish I could tell you I had some weird craving. I wish I could be like that woman on the advert who loves tuna fish and banana, but I’m not like that at all.”

Winslet, who will be appearing on the November cover of Vogue magazine, said she is feeling good as she enters her third trimester. “I’ve still got a way to go, so I’m not quite waddling,” she joked. “Just don’t let me sneeze, because I might wet myself at the same time.”

Next up: Pregnant Emily Blunt is glowing!