The popular reality show Duck Dynasty just wrapped up its fourth season, but don’t let that stop you from checking out these down-to-earth baby names inspired by the show. 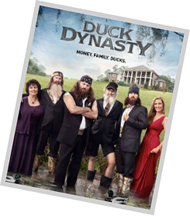 Beards and duck calls for all

The popular reality show Duck Dynasty just wrapped up its fourth season, but don’t let that stop you from checking out these down-to-earth baby names inspired by the show.

Duck Dynasty, a reality television show on A&E, features the lives of the Robertson family. Phil Robertson started the business 25 years ago in Louisiana, and now their company, Duck Commander, is a multi-million dollar enterprise.

The show is beloved by many because the family is very down-to-earth and unpretentious, and they have fulfilled the American dream. Lindsay from Texas is a regular watcher, and their success story is inspiring and appealing to her. “Phil and Kay were high school sweethearts, a football player and a cheerleader, that got married and had four kids,” she told us. “Their marriage survived addiction and he came through the other side a successful business owner.”

Their son Willie is now the CEO of the company and he and his three brothers have families of their own — and there are plenty of baby names amongst the friendly, God-loving family for everyone. One interesting name is Merritt, who was Phil’s mother. The name was bestowed upon her great-granddaughter also, which makes it a cool and interesting choice for a girl.

Which names are your faves?