A Chicago grandmother has launched a petition asking the makers of laundry detergent pods to have an additional layer of packaging. Is it the company’s obligation to make their product safer, or does the ultimate responsibility lie with parents? 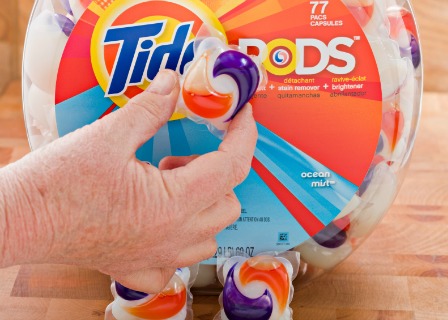 When Erica Johnson’s 15-month-old grandson sank his teeth into a Tide Detergent Pod, she discovered exactly why they are so dangerous. He became ill almost immediately and was rushed to the hospital.

Thankfully, his life was saved — but there are little ones who haven’t been so fortunate. She was inspired to create a petition on Change.org asking the manufacturer, Procter & Gamble, to add an extra layer of packaging around each individual pod so other families won’t have to suffer if their child gets hold of one. Where do you stand on the issue?

Johnson argues that the pods, which are colorful and small, look like candy — and she contends that people who have to leave their home or apartment to wash their laundry at a public machine don’t transport the entire package. She states that the extra layer of packaging will ensure that no other children become gravely ill from accidental ingestion.

Like Johnson, some moms feel that the company does have a responsibility to make their packaging safer. “Medications are made to be childproof and parents are also responsible for keeping them away from kids,” Ashley, mom of four, pointed out. “So if the medication companies are doing their part to be sure kids are safe, I think Tide should do the same. Way too many kids have died or become seriously ill from these packets.”

Rebecca agrees that Tide needs to reconsider the design of the product itself, as well as its packaging. “They are extremely attractive and colorful and swirly — and that is by design, not by necessity,” she explained. “I definitely think there is a responsibility when you are a huge company manufacturing potentially hazardous items to not make them so appealing to kids that they will want to eat them.”

Brittney from Ohio agreed. “As horrible as I feel for these children and their families, I think it’s the parents’ responsibility to keep their children safe,” she told us. “Parents are expected to keep sharp objects and chemical cleaners away from their children and I don’t see this as being any different. We don’t see people telling companies not to make blue window cleaner because it looks like Kool-Aid.”

Erica hopes that her petition will continue to gain ground — as of this writing, there were over 27,000 virtual signatures collected, with that number jumping by the minute. She wrote, “I believe that with enough support from consumers and parents concerned for their families’ safety, Tide will listen and change their detergent pod packaging to look less like candy by adding an extra layer of protection around each pod and more clear warnings to reflect the real risk these pods have been proven to carry.”

It will be interesting to see what Tide’s answer is as the petition continues to gain momentum. But if you use these detergent pods, please make sure you keep them out of reach at all times, and if you transport them, keep tabs on them until you use them — it could save your child’s life.

28 mins ago
by Sydni Ellis

38 mins ago
by Rita Templeton