Losing a baby before or after birth is devastating, but you may be unsure of what to say to your friend who has suffered such a loss. Moms who have been through this experience, as well as experts, help guide you in the right direction. 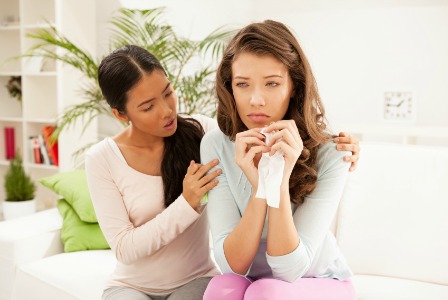 October is Pregnancy and Infant Loss Awareness Month. Miscarriage, stillbirth and neonatal death are subjects that aren’t discussed often, but parents who have lost babies can and do use the support of friends and family members. What can you do — and say — if your friend or loved one has suffered a loss?

Some people feel uncomfortable talking about pregnancy and infant loss. Amy Vickers, RN, BSN, IBCLC, is executive director of the Mothers’ Milk Bank of North Texas, and she has a little insight to share. “With pregnancy loss, some people feel embarrassed or awkward about the subject,” she shared. “In years past, we’ve noticed that people avoid addressing the loss and the parents were left alone with their grief. I think the reason these early neonatal and pregnancy losses were ignored is because family and friends did not know or see the baby, or understand the impact this type of loss has on the mother. All mothers need the same support for their grief.”

And while acknowledging a loss is important, there is also plenty of value in being there for a grieving mother. Jenn, who lost her first pregnancy, said that she didn’t really want to hear anything from anyone — instead, those who were simply there for her made the most difference for her. “There isn’t much you can say to take away the pain of loss, and sometimes supportive silence is just what is needed,” she explained. “The best support I found was from the people who just let me express my emotions in whatever way they came out. They recognized that there were good and bad days, that it was a natural progression of grief, and I knew I could count on them to not interfere in that process.”

Let your friend know that you’ll be there for her — and mean it. “Best thing anyone said to me was, ‘I am here for you in any way that you need me,’” said Vicki from Canada. And offer specific help, such as fetching groceries for her or taking her kids out to the park for an afternoon. Even more importantly, don’t forget about her in the weeks and months that come. The need for companionship and a kind soul to talk to doesn’t disappear after a few weeks.

What not to say

The moms we spoke with had plenty to say about phrases uttered by well-meaning family and friends that, instead of comforting them, made them angry, upset or confused. Vicki told us what she thinks some of the most unhelpful things are:

Instead, a sincere “I’m sorry,” a hand squeeze and a hug are priceless to grieving moms. “One of my sisters sent me flowers after a pregnancy loss,” Carrie, mom of three, told us. “She didn’t talk to me a lot about the loss, but I knew she was there if I needed her and the flowers were a nice surprise. They helped more than anything because I felt like she understood.”

More on pregnancy and infant loss