Stacy and Gary waited around 3 1/2 years between Chloe and their next baby, and fortunately it only took two cycles for them to conceive. Her pregnancy went well until she was close to 29 weeks, when she noticed that she was losing mucus plug and contracting. A visit to the OB left her with a couple of steroid shots and on bed rest because she was dilating. 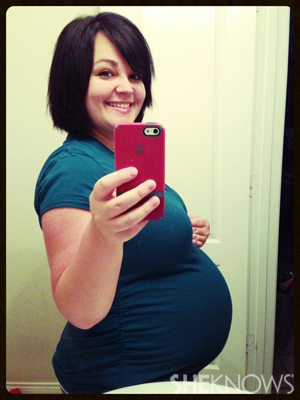 The goal was to get her to 34 weeks because there was a lot of crucial development during that time. “I was put on Procardia to slow my contractions,” she explained. “It worked. I did still have contractions, and I did still lose small bits of my mucus plug, but baby boy stayed put.”

And stay put he did. She made it to her 36-week appointment, where she found out she was 2 centimeters dilated. A relaxing evening followed, with Gary doing some grocery shopping and putting the girls to bed. In the middle of the night, around 1 a.m., Stacy was awakened with a strong, painful contraction. “This one was different than the ones I had been having, as there was a very concentrated pain in my pubic bone,” she remembered. “I was having to breathe and moan through it, and it woke up Gary. ‘Are you OK?’ he asked. And then my water broke.”

After Stacy changed clothes, her contractions started with earnest. Gary got the girls up and dressed, and Stacy phoned her doctor, sister and mom and told them she was in labor. Since her contractions were so intense and so close together, they just brought the girls to the hospital with them, instead of dropping them off at their aunt’s house.

They had an hour-long drive to the hospital, and Stacy couldn’t believe how painful her contractions were already. “I actually started to vocalize through them a bit,” she said. “In between contractions, I would talk to the girls, who were quite alert for the hour, and made sure they were OK. We had talked with them for months about what it might be like when mommy went into labor. They were doing great.”

They arrived at the hospital and Stacy was loaded up and checked in, and she remembered that the nurses remarked how well she was handling everything. “I thought I was falling apart,” she confided. “The pressure on my pubic bone was so great, that I thought it might snap in half. They went ahead and checked me and I was 4 centimeters. It was about 2:20 a.m. at this point.”

Things continued to progress quickly. She tried a birth ball to see if she could get more comfortable, but it didn’t really alleviate her pain and she told Gary she wanted an epidural. “I didn’t tell anyone, but I wished in that moment that I was numb and having my baby removed from me so I didn’t have to bear the pain,” she explained. “It wasn’t until later that I realized I was in transition.”

A nurse started up an IV and told her an anesthesiologist was on the way, and they began to help her move to the bed. Once she got over there, however, the contractions piled up to the point where she could barely breathe. Her body started bearing down. Her mom and sister peeked in and she wasn’t even able to greet them due to the overwhelming contractions.

“As soon as they left the room, a huge contraction hit and my body started pushing,” she shared. “Noises were coming from my body that I never knew were possible, and I screamed ‘I’M PUSHING! I’M PUSHING! I HAVE TO POOP!!!’” 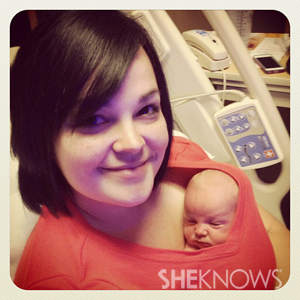 Stacy was still sideways on the bed as hospital staff flooded in. A doctor requested that she try to not push (“Yeah, right!” she said) and after two pushes, her baby’s head came out, soon followed by his body. “He laid in front of me, between my legs that were hanging off the side of the bed,” she recalled. “I was stunned. I looked at my nurse… then at Gary… then at my baby. What on earth just happened? Did I just push my baby out, pain med-free? Surely not. But yet… here he is. I heard someone say, ‘Time of birth 3:30 a.m.’ [and thought] oh my gosh, I did it.”

Looking back, she knows that when she felt like a failure, when she asked for an epidural, when she felt that she could go no further… she was in fact doing it.

“It was the hardest thing I’ve ever done in my life, and I’m so proud of myself,” she said. “Conley Jacob Taylor was born at 3:30 a.m. on July 25, 2013 after 2 hours and 20 minutes of labor. An unmedicated, completely natural VBAC, that almost wasn’t. But it was. And I rocked it. Oh, and my mom? She got a text with a picture of our baby before they even made it to the waiting room.”

9 hrs ago
by Lilian_Burns, Tamara Kraus