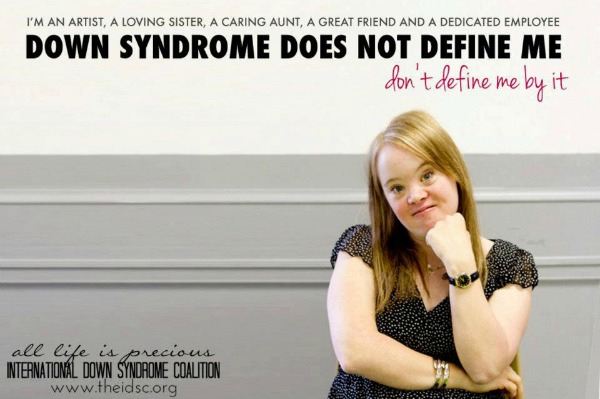 For organizations whose missions include the words, “advocate for individuals with Down syndrome,” their efforts to educate often live through targeted marketing campaigns intended to overcome stigmas and communicate the positives about a person with Down syndrome.

But when does that effort go too far? When does marketing become promotion of stereotypes? What if those efforts impart the illusion of a child or adult with superhuman, spiritual qualities?

Now, some — if not many — parents of a child with Down syndrome truly do believe their child is a gift from God, a blessing bestowed only onto special people.

I’m not one of those parents. I believe both my children (and my third child, currently under development) are blessings, but neither is more special than the other — and under no circumstances am I an extra-special person chosen to parent a child with different abilities. No way.

I’m just like you, and my son is just like your son — in so much as sameness matters. Differences are what make us unique, after all.

Perhaps the Down syndrome community’s penchant for trumpeting the positives of individuals with Down syndrome and glossing over the realities stems from the D word we battle every day. The word “disability” seems to naturally evoke a negative image, because it’s a direct spotlight on what someone cannot do. The urge to market Down syndrome may be driven by the overwhelming need to combat that word, and turn the focus from disability to different abilities.

Sometimes, those efforts go too far.

Neither the National Down Syndrome Congress nor the National Down Syndrome Society responded to requests for comment for this article on the pros and cons of marketing Down syndrome. Perhaps sensitive to the topic, each has come under fire at various times for implementing a marketing campaign that, to some, felt disingenuous, akin to propaganda or simply irrelevant.

The truth is that each organization has done tremendous good for individuals with Down syndrome, and in any organization’s history, a program or campaign is bound to fall flat. Raising awareness is a critical first step to inching closer to tolerance and acceptance. And then, the ultimate goal — the embrace of inclusion, meaning a society that understands and advocates for the benefits of including individuals with an extra chromosome into every facet of life, from school to play to work.

“I am a big fan of raising awareness — and by that, I don’t mean making society aware of Down syndrome — I mean dispelling myths and advocating for inclusion, compassion and equality,” shares Lisa Morguess, whose son, Finn, has Down syndrome.

“I’m not a fan of ‘selling’ Down syndrome,” she says. “I want Finn — and all my kids — to live in a world that assumes that every person has intrinsic worth because they are part of the human family, regardless of what they look like, how they learn, what they are capable of, or even whether or not they will ever be ‘independent.'”

Paul Jones is a cause-marketing consultant and coach who blogs at Causemarketing.biz.

How subjective is that area, though? Is one person’s “honor” another person’s “dishonor?” 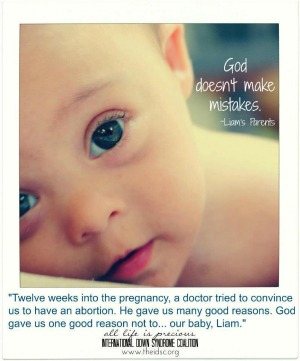 “I’ve always personally disliked campaigns that depict a child or a handicapped person in a pitiable way or circumstance and then suggest that this wouldn’t have happened if only you had helped,” Jones says.

Sandra has three children with Down syndrome. “… There is a big difference between educating and misleading,” she says. “I think the line is drawn between what is empirical and what might be considered spiritual.

“Personality traits fall somewhere in a gray area and I think that is what people argue over the most. Maybe someday science will show us one way or the other if personality is driven by chromosomes, and specifically the 21st one. When the line is crossed, it dilutes the message that people with Down syndrome are ordinary whole beings just like us.”

The International Down Syndrome Coalition (IDSC) has a photo campaign through social media. On its website, IDSC says the goal of the campaign — which asks for photos of loved ones with Down syndrome — is “to spread awareness for our loved ones by sending messages to the world with captions on photos that you send in.”

The photo campaign has stirred some discontent among parents of children with Down syndrome, usually not because of the photos but often because of the wording that accompanies photo.

IDSC explains the process. “You can help us create a caption, or we will help create one for you! …One of our editors will contact you shortly after you send in your photo to discuss verbiage for your photo.”

Linda Nargi is the executive director of the nonprofit and mother of two girls with Down syndrome.

“The editors for the IDSC photo campaign work very hard behind the scenes every day with the guidance of the IDSC leadership,” she says. “We work closely with the family to fine tune the message they want to send the world about their loved one with Down syndrome while keeping the greater disability community in mind. It’s a delicate balance.”

Sometimes, the scale tips against them.

Up next: More about Down syndrome awareness campaigns