What was on the minds and twitter feeds of some of our favorite celebrity moms? E! News host Giuliana Rancic tweets about “exciting” baby news, while Vanessa Lachey shares photos from Camden’s first birthday. Holly Madison tweets about her wedding and shares photos of her dress, while Fergie and Josh Duhamel share the first photos of baby Axl. 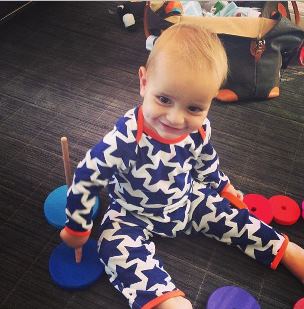 “Someone is watching himself on #GandB! Season finale is on right now on Style!!!” Giuliana Rancic wrote, sharing this cute photo of her 1-year-old son Duke wearing a star-printed outfit.

It sounds like baby Duke will be getting a sibling soon!

“Our exciting announcement is… Giuliana & Bill starts airing on E! on Oct 15!!!!!” tweeted Giuliana, with a link to an article on E! News that explains that she and her husband, Bill Rancic, are getting ready for baby number two!

To catch you up to speed, the season finale of their reality show, Giuliana & Bill, showed them asking their surrogate if she would carry their second baby… and, of course, the show ended before we could hear her answer.

So…will she do it? “I can’t tell you! I can’t tell you because there’s a new season coming up in a few months and we don’t wanna spill,” Rancic said. “I can confirm that we definitely asked her and that we love our surrogate and that she is seriously considering it, but the truth is nothing’s really happening right now, to be quite honest. But you’ll see. Her answer might surprise a lot of people but that’s gonna be on the new season that’s in a few months.”

Check out my interview with Giuliana where she talks about surrogacy, mommy must-haves and which celebrity tot she wants to fix Duke up with >> 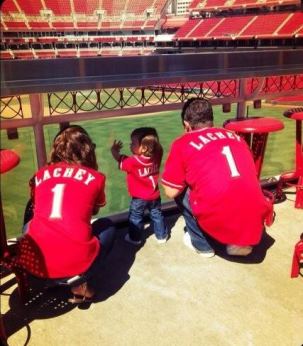 “Cam’s 1st Birthday in Cincy was a success! Beautiful day, lots of sweets, and so much Love! #TimeFlies,” tweeted Vanessa Lachey, sharing this adorable photo of her with husband Nick Lachey and baby Camden in Cincinnati.

“Thank You ALL for Cam’s 1st B-day wishes & Love! U guys are the BEST! Check out his onesie! It’s true, haha!” she later wrote, linking to a photo of her son wearing a onesie that said, “Made in Ohio.”

Vanessa also shared a photo of cupcakes made for Camden by Nick’s brother, Drew Lachey.

Why did Nick and Vanessa choose the baby name Camden? Check out my interview with the new mom to find out! 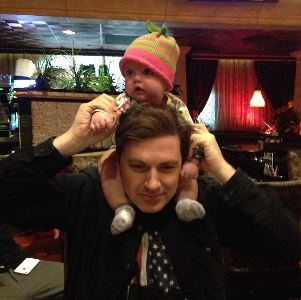 “My family,” wrote Holly Madison, sharing this photo of her new husband, Pasquale Rotella, and her daughter Rainbow.

Madison and her new husband, Pasquale Rotella, got married on Sept. 10 at Disneyland in Anaheim, California. She wore a custom-made Greg Barnes gown paired with a $500,000 diamond tiara! The couple’s 6-month-old daughter Rainbow Aurora, was her “mini-bridesmaid.” Her Girls Next Door co-star Bridget Marquardt and Laura Croft were both bridesmaids at the wedding.

“Such a happy day!!” tweeted Madison, who included a link to her website which showed photos of her on her wedding day.

“Feels wonderful to finally be married,” tweeted Madison. “I had the most magical wedding.”

Madison also shared her favorite books she wants to read to Rainbow. “Can’t wait to start reading these to my daughter before bedtime,” she tweeted.

“I’m in love with this version of Grimm’s Fairy Tales from Taschen,” Madison wrote on her website. “Rainbow’s not quite old enough to be interested in it yet, but I’m sure she’ll love it when she’s older. It’s all the original Grimm’s versions of the fairy tales, which for the most part are much darker than the versions of the fairy tales we are used to today. Each tale features beautiful vintage illustrations as well.” 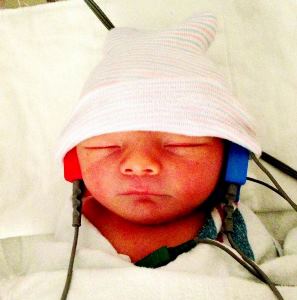 Her husband, Josh Duhamel, also shared a photo of their son on Twitter, writing “Axl Jack Duhamel Day 1. Life is good” and using the hash tag ” paparazzi you can leave our house now.”

The day before, a fan tweeted to Josh, “when we see a photo of your baby?”

“Right now we just want him all to ourselves,” the new dad wrote.