Happy Wednesday Hump Day — also known to us as Celebrity Baby Bump Day! We have rounded up the cutest pregnant celebrities of the week, including Kate Winslet, who debuts her baby bump at the Toronto Film Festival. Pregnant Gwen Stefani shows off a tiny baby bump, while Rachel Zoe revealed her new pregnancy curves at New York Fashion Week. Pregnant Jennifer Love Hewitt and James Van Der Beek’s wife, Kimberly, round out our list of cute pregnant celebrities of the week. 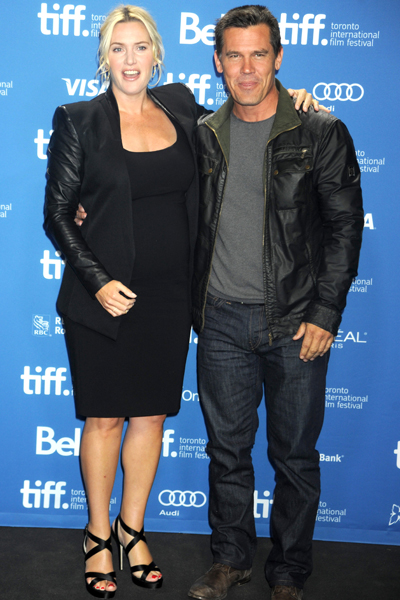 Kate Winslet debuts her baby bump in a black dress paired with a blazer at the Toronto International Film Festival, as she stood alongside her Labor Day co-star Josh Brolin. The actress, who is expecting her third child (her first with her husband Ned Rocknroll), said she hasn’t gained much weight this pregnancy.

“I’ve been really good this pregnancy, partly because I was working in the beginning until about 20 weeks. I couldn’t have it all go to my face,” she told USA Today. “Then it spilled it into — ‘I don’t know how much I can be bothered to have to lose the weight.’ It’s such a pain in the (expletive). I’m not one of those people for whom it magically drops off.”

The 37-year-old Titanic star has a 12-year-old daughter, Mia, with her first husband Jim Threapleton, and a 9-year-old son Joe with her second husband, director Sam Mendes.

As she already has a girl and a boy, Winslet confessed she wasn’t finding out the sex of her newest baby.

“I just didn’t want to. It’s kicking like crazy today, actually,” she said. “I have actually really been enjoying this pregnancy. It’s been good. I was tired in the beginning. But now it all feels OK.”

Next up: Do we spot a little baby bump on Gwen Stefani?