Almost as maddening as a child’s misbehavior is the inability of a husband and wife to agree on how to address the problem.

Related story Maren Morris Is Trying Not to Use Baby Talk With Her Son; Should You?
Don’t send your spouse to timeout 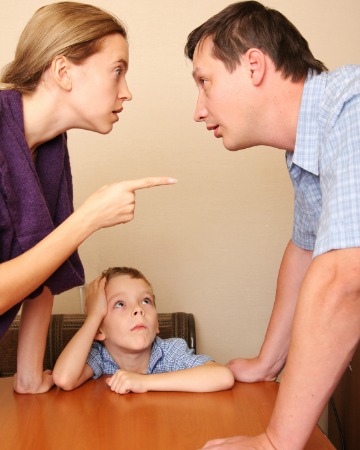 If you and your spouse just can’t seem to see eye to eye on discipline, consider employing one of the following techniques to come to a consensus.

Many couples assume that they will parent well together simply because they love one another and enjoy each other’s company. Parenting conflicts, however, are a common source of contention between spouses. We spoke with Dr. Tina Paone, clinical director of the Counseling Center at Heritage in Montgomeryville, Pennsylvania, to get her advice on how to manage parenting conflict between spouses.

A common source of disagreement

Just like disagreements about finances and sex, parenting choices can become an ongoing argument between spouses. Discussions often grow volatile because parenting choices are tied to individual values and experiences with parenting from childhood. “Varied parenting styles can be a point of contention between spouses because parenting ‘norms’ vary from person to person,” Dr. Paone said. “These ideas are learned during childhood, and your spouse’s parents parented differently than your parents did when you were a child.”

When all else fails

Finally, Dr. Paone stated that co-parenting counseling is beneficial for couples who are tired of disagreeing but don’t know how to come to a consensus. The process is helpful for married and divorced couples alike. Finding ways to agree on parenting will benefit both your relationship and your child, so it’s important to invest in solutions that work.

Mom vs. Dad: The discipline debate
Help! My kid is annoying
How to avoid being a helicopter parent

12 hrs ago
by Racheal Pulver