The Young and the Restless star Michelle Stafford may have exited her long-time role as Phyllis Summers on the popular soap opera, but this single mom already has her plate full with her new daughter and her new web series. 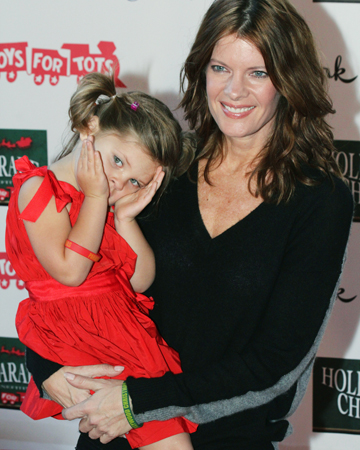 The Young and the Restless star Michelle Stafford opened up to us about her long road to motherhood, which included fertility treatments, failed adoption attempts and finally a beautiful daughter via a surrogate.

“It was time,” Stafford tells us about her character, Phyllis Summers, leaving the show this summer after 15 years. “But really, how much fun can one person have, I ask? I was actually on for 15 years and it was such a great ride!”

Yes, her character Phyllis may be lying in a coma, however the 47-year-old Stafford is excited about the next phase in her life. We chatted with the two-time Emmy Award winner about her new comedy web series, The Stafford Project, as well as her biggest project yet — being a single mom to her adorable 3-year-old daughter Natalia Scout Lee.

What we love about Stafford is that despite her struggles with getting pregnant and starting a family, she kept her positive attitude and humor through it all.

In fact, we think being a mom is her best role yet!

Michelle on leaving The Young and the Restless and Phyllis

SheKnows: Fans adore your character Phyllis! Why did you decide it was time to leave the show?

Michelle Stafford: I love everyone on that show — the actors, the writers, the producers. They are good people. They are all trying to make a good show, and I want that show to do well. I want it to soar! So the reason for leaving was that I just really wanted to do other things. Playing one character for 15 years is enough.

SK: Do people stop you on the street and ask you questions about Phyllis, you know, like she is a real person?

MS: No, they pretty much know it’s me, Michelle. A lot do say, “You’re exactly like Phyllis,” which I don’t really take as a compliment. People have always been really nice to me. I feel like soap fans are literally the best fans in the world. And they have been so supportive of The Stafford Project. In the first three weeks the series has received over 130,000 views and is still climbing. The fans have been so supportive of my new website as well, MichelleStafford.com.

I launched the new website and blogs because of the fans. It actually started with my Instagram. I would write things about motherhood as a single gal or about being single and getting my groove on as a woman. And I had a barrage of women commenting back in agreement, saying “You have to write a blog.” There are lots of women out there who are single moms in their 30s and 40s who are trying to make it all work — being a good mom, trying to be great at their job and trying to get their groove happening as a woman. Some have given up on that last one, which is easy to do. My site is about saying “Hey, I get it. I feel it too” — but in a funny way, so we can all laugh at ourselves.

SK: Your fans will kill me if I don’t ask. Since Phyllis isn’t “dead” and is just in a coma — any chance we can expect to see you return on Y&R?

MS: I don’t think I will be returning. But I do love the show! It was so much fun to play that character and entertain people every day. So honestly, thank you so much for the love! As an actor, all you want to do is entertain people and make them feel, so if I did that, I really am honored. I am enjoying creating my own show right now, The Stafford Project. Really, at the end of the day, I just want to entertain peeps!

Michelle on The Stafford Project

SK: Tell me about your new web series, The Stafford Project. Is it scary to expose you and your real life on TV, after acting as someone else for so many years?

MS: Well, I am really being someone else again. I am playing out situations that have happened in my real life, but of course we (me and “The Paiges” [series co-creators]) have exaggerated these experiences in order to make them more entertaining for folks. So, I’m really not playing myself — I’m playing a made-up version of me. All the episodes (except episode three) are based on true experiences. Things I have thought, have experienced myself or have happened to me. We then write it in a manner that is comedic so people can have a good laugh at my expense. All of my life I’ve been a good storyteller. At parties I always find myself holding court with some insane story that happened to me or my viewpoint of somebody else’s wild experience. I am able to see all sides and opinions of everyone involved. l also learned early on in life that you have to laugh at the horrific or you are never gonna survive. So that’s how it came to be.

SK: I saw your first web series and your daughter is so cute — and she does not seem to be camera shy at all! What does she think about cameras following her around? Is she OK with it? 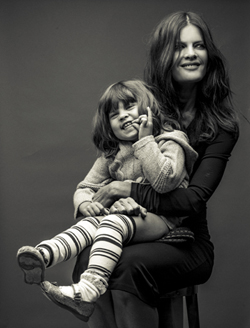 MS: They don’t follow her around actually. She was on each 8-minute episode for 30 seconds (give or take) — although, I have been following her around like a stalker since birth with my iPhone and Canon taking pics of her! I have 20,000 photos of her in my computer. But I’ll tell you, if she turns into a diva, she’s cut from the show.

Michelle on being a single mom

SK: I loved your comment on your web series, “I don’t struggle with men, I struggle with getting pregnant.” Were you at all nervous about being a single mom?

MS: Yes, but the alternative sucked, ya know? Not having a child. Wow, the thought of that was initially unbearable to me. Through my life, by so many, I had been told I would not be a good mom. So I began to believe it. Clearly those people were idiots and they are no longer in my life. I was always very focused on my career. That’s sorta the deal in this day and age. Very few women can just be stay-at-home moms. Both parents usually have to work, and as a mother, that is very hard. Us women, clearly we are the most powerful sex. I have so much respect for working mothers and working single mothers. So much respect. I just want to get us all in a room and have a big party!

SK: Your quest to be a mother was a difficult one, as many women struggling with infertility can relate to. What all did you go through and what would you tell women going through the same struggles?

MS: Well, you don’t really want to know what I went through, because that would bore your readers to death. I will tell you that I have pretty much a Ph.D. in the female reproductive system by now. My advice is to live and to not get stuck on what’s not happening. I am a huge advocate of adoption as well. I was working on that at the same time as trying to have a baby myself. I went with what happened first. For me, having a biological child happened first. I had a beautiful thing happen when my surrogate was 5 months pregnant with Natalia. A friend of mine called me and said, “I have your baby, it’s a boy,” (she didn’t know about Natalia yet — I didn’t tell people until late in gestation). This friend’s niece had gotten pregnant very young and had the baby, but then decided to give it up. I told her that I couldn’t take the baby, but that a girlfriend of mine who had been trying to adopt for two years with no luck would take the baby. It was actually a beautiful thing, calling my friend and saying, “I found your baby.” Natalia and this boy play together. He is an incredible kid! Full of life and gorgeous! I am big fan of adoption.

SK: I think it is so great that you are talking about your success with using a surrogate because I think there is still an air of mystery around it for many people. What is the most common question you get about using a surrogate — and how do you answer it?

MS: Well, it is still not legal in many states, which is odd to me. People don’t really ask me questions about it. I am open to questions though. It was very, very hard for me, because I tried for so long to do it myself. Honestly, at the time it made me feel like a total failure as a woman.

She (my surrogate) was doing what I should have been doing — carrying my baby. I couldn’t get over it. Every time I would see her or go to doctor’s appointments with her, I just felt like a loser, a failure. It is what it is, but I’ll tell you, having gone through that whole thing, it really broke me down and at the end I’m much more confident than I ever was. Sometimes we gotta “be in it,” we gotta experience the hell to really appreciate the good. To really know what the “good” is and live for it.

SK: Do you plan on telling your daughter about her surrogate? How will you answer her questions about her father?

MS: Yes, at some point. I am still in contact with my surrogate. She will always be in our life — she and her whole family. They saved my life. They are beautiful people. I was very hands-on when my surrogate was pregnant. I felt I had to be. We spoke all of the time. She was very kind to me. She knew how hard I had tried. She is a beautiful woman. I’m gonna save this for the book, which I’m writing now.

Michelle on dating as a single mom 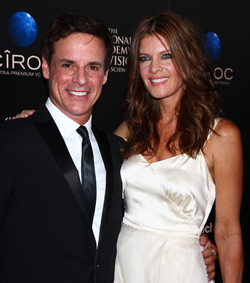 SK: How has dating changed now that you are a single mom? Do you introduce Natalia to your dates right away — or do you wait?

MS: I introduce her to the good ones. I don’t introduce her to the tools. I’m actually writing a blog about this very thing right now. I have many, many men in my life. I have great male friends. They all have a desire to be a good, male role model for Natalia. Christian LeBlanc [plays Michael Baldwin on Y&R] is amazing with her! She has two grandfathers — my biological dad, and my step-dad. They adore her and spend a lot of time with her. There’s no lack of great men for my kid.

SK: Do you want more children? If so, do you think you will adopt or go the surrogate route again?

36 mins ago
by Taylor Lane