What were on the minds and Twitter feeds of some of our favorite moms? Fergie and Josh Duhamel welcomed baby Axl Jack, while Alyssa Milano shared her (gulp) “sex tape” via Twitter. Jamie-Lynn Sigler shared a photo of her baby boy Beau, while we checked out Gwen Stefani’s tweets to see if the pregnancy rumors are legit. 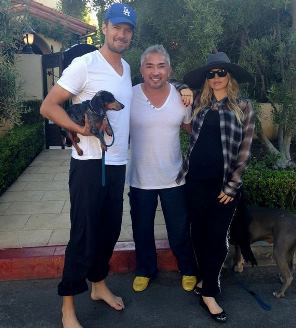 Although the new mom has yet to share a photo of her son, whose named is reportedly inspired by Guns N’ Roses front man Axl Rose, she did post this picture just two days before she gave birth, as the couple prepared their dog for the arrival of the baby.

“@joshduhamel & I getting our doggie daughter ready for her new brother with @cesarmillan,” she wrote, sharing this photo of her and Josh with the Dog Whisperer Cesar Millan.

The Black Eyed Peas singer has been too busy with mom duties (or is it doodies?) to tweet since Axl’s arrival, but Josh took to Twitter to thank their well-wishers.

“Sorry about the absence. I truly appreciate all of your well wishes. All is good! In fact, never better. Much love, JD,” he wrote on September 3. 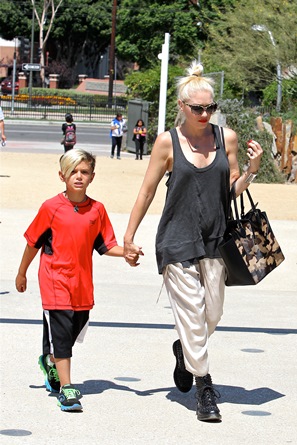 Gwen Stefani is reportedly pregnant with baby No. 3, although the No Doubt singer has yet to confirm the news herself. Perhaps her Twitter feed will give us the clues we are looking for?

“On my way to the mall is that twitter worthy – twitter is weird,” wrote Stefani looking her usual fab self in a fedora and her signature red lipstick.

“Standing in my kitchen taking pictures of myself for u – umm weirdo go to bed self,” she later tweeted.

Her last few tweets were birthday wishes to her friends and band mates, leaving the pregnancy news still up in the air.

Heading over to her hubby Gavin Rossdale’s Twitter page also doesn’t reveal any pregnancy info (or even cute photos of the couple’s two kids, Kingston and Zuma), however we did find this deep thought from the Bush front man:

“the definition of modern art is- i could have done that + but i didn’t,” he tweeted.

Perhaps photos speak louder than words? Stefani was spotted out with her son Kingston on August 29 wearing a flowing top that revealed a (maybe) tiny baby bump. 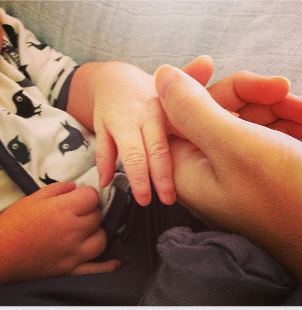 Jamie-Lynn Sigler and her fiancé Cutter Dykstra welcomed a baby boy, Beau Kyle Dykstra, on August 28 and the Guys with Kids star shared this adorable photo on Instagram.

“We hold hands cuz we are besties,” she captioned this sweet photo.

“Thank you for all the love! @CutterDykstra and I feel so blessed and appreciative of everyone’s well wishes,” she tweeted.

“So madly in love with our BOY!”

So, Alyssa Milano shared her sex tape on her Twitter feed.

“My sex tape was leaked. Not sure what to say. Going to post the link myself to try to control the situation,” she later tweeted, with a link to her video on Funny or Die.

The sex tape isn’t exactly what you are thinking, as it shows Milano and a guy who appear to be staging a sex tape, before the camera turns and focuses on a news report covering the situation in Syria.

Basically, it is her sneaky way to get people to focus on what is going on in Syria, and, it worked, as of last count the video has over 2.6 million views!

“I want my son to live in a world without war,” she tweeted, referring to her 1-year-old son Milo.

“4M+ kids are now affected by the brutal conflict in #Syria. Support @UNICEFUSA’s efforts to help #ChildrenOfSyria,” she later wrote, with a link to UNICEF.