Can too much screen time really translate into poor school performance? According to a new study, every hour over the recommended two hours of screen time per day results in poorer attention, low math skills, poor vocabulary and low physical skills. 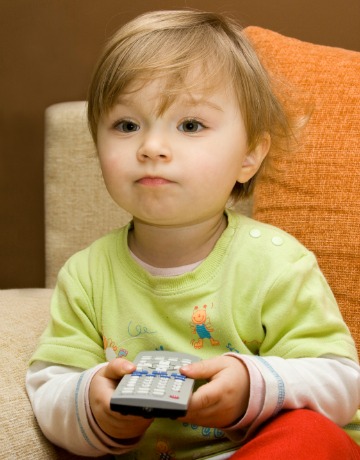 We spoke with an expert to get the latest on this hot-button issue.

When Sesame Street debuted in 1969 the concept was unique — entertaining and educational content that could hold the relatively short attention span of the preschool crowd. Not your silly Saturday morning cartoon fare, Sesame Street won over parents who were looking for decent television shows they could feel good about letting their young ones watch.

Fast forward 40 years and the amount of content — animated and otherwise — that is aimed at the toddler and preschool crowd is overwhelming. Entire channels are devoted to the smallest members of your household. Add in the huge assortment of tablet, iPad and iPhone apps and your kids are spending a lot of time in front of a screen. With so much entertainment available 24/7, how much is too much?

Many parents assume that if a television show or app is touted as “educational,” time spent using it is all good. But there is more going on during this type of activity than just learning colors and animal names. Dr. Rita Eichenstein, Ph.D., is a developmental psychologist who specializes in neuropsychology and parenting skills. She is also the author of a book in development called Resetting Normal: The Emotional Journey of Parents of Children with Challenges. “Prominent research in the 1980s and 1990s has already shown that heavy screen viewing influences the very nature of thinking, largely due to its passive nature,” she shares.

The passive nature of these activities differs significantly from the skills needed for reading and problem solving. “The nature of receiving passive information — which bombards the sensory system with high-paced visual and auditory stimulation — increases a pattern of passivity which affects a child’s ability for critical thinking,” Dr. Eichenstein adds. “Studies have shown that prolonged exposure to screen time affects a viewer’s perceptual, spatial and verbal abilities.”

Check out these great iPad apps for children with autism >>

A Canadian study suggests that there may be a correlation between the amount of TV viewing and success in kindergarten. The study examined how the television-viewing habits of about 2,000 children (at the age of 29 months) affected them when they started kindergarten down the road. Researchers noted that for every hour increase in daily TV viewing (over the American Academy of Pediatrics recommended two-hour limit for children age 2 years and older) was associated with poorer vocabulary, math skills and attention, reduced physical abilities and an increased risk of being bullied in kindergarten.

Children are in a very rapid period of brain development in their first five to six years of life — yet this is a time when parents are increasingly using screen time as a way to occupy their child. “A child in the first five years of life is busy creating new neuronal connections in his or her brain,” says Dr. Eichenstein. Interacting with people and learning to communicate with them is one of the most important developmental milestones. “Finding out about the fascinating textures of the world — from sand play to petting kitties, to working with pegs and toys — a child is learning how to navigate his or her body through the world.” Sitting passively in front of a screen takes away from these activities that are so very important. “Sensory experience, particularly, triggers strong brain development,” says Dr. Eichenstein. “Touching, tasting, exploring the world with one’s body are key factors in healthy brain development.”

Also important during this period is for children to simply play. “Heavy or even moderate use of screen time displaces other childhood activities,” says Dr. Eichenstein. “Physical play, daydreaming, learning to self-soothe or amuse oneself, family visits, napping, imitative play (like making a sword out of a French fry) have all been found to enrich a child’s social-emotional world.” When parents use screen time to occupy their child’s “free” time — or as a babysitter — it replaces times of play, daydreaming and even boredom that are so very important as your child grows.

Going old school: Lessons to teach while playing with blocks >>

From couch to classroom

Alice Jungclaus, M.Ed., currently teaches second grade and has taught in private and public school systems for over 18 years. “I have definitely noticed a shift in the ability of particular young children to persevere in tasks that require mental effort in the primary classroom, such as learning to read and write,” she shares. She sees children that have been overexposed to television and movies at home often lack the ability to focus attention during literacy lessons — and struggle significantly.

“There often seems to be a correlation between the children who struggle in this area and the amount and quality of screen time they have accumulated at home in the early years (television, movies and gaming devices),” she adds. “This precious time at home before arriving in kindergarten is what sets the stage for school learning and children who have had a steady diet of screen time often have difficulty adjusting to the expectations for a successful school life.”

Screen time is easier to manage when you don’t introduce it in the first place. Toddlers really don’t need any screen time, so try not to introduce it right away. If your child is already a screen addict, start by reducing the amount he is allowed each day, until he is down to the recommended two hours per day. Also pay attention to your own screen-time habits, and remember that you are setting an example for your kids.

The Best Reusable Nursing Pads for Your Wallet and the Planet

The Most Darling Baby Dolls For Your Nurturing Toddler