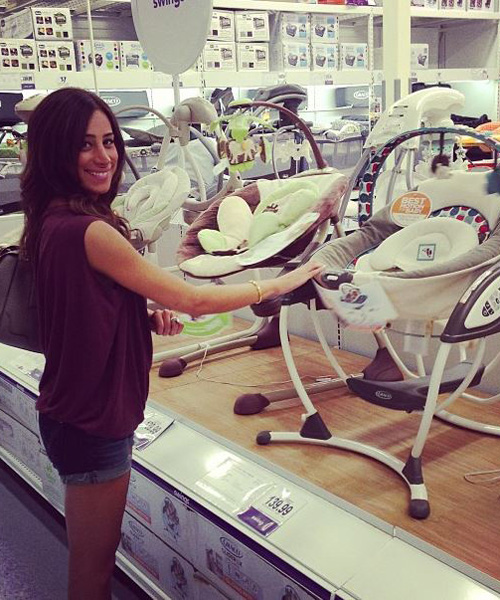 “So many choices!!??” Kevin Jonas wrote on Instagram, sharing this photo of his pregnant wife, Danielle Jonas, checking out baby swings.

Kevin and Danielle are expecting their first child together — and they recently revealed the sex of the baby via video on Ustream.

“We’re having a girl!” Kevin announced, with pink balloons surrounding the couple.

”I’m going to be a father to a little girl. Mind blowing. So excited,” he said.

Danielle shared her joy with the news that they would be having a baby girl. ”It’s a girl!!! I am so happy I been able to share everything & not have secrets it’s been so nice. Thank u for all the tweets of excitement,” she tweeted.

The couple, who appear on their reality show, Married with Jonas, announced in June that they were expecting. ”It’s true — Danielle is pregnant! Can’t even imagine how excited we are,” Kevin said.

Next up: Simon Cowell and his pregnant girlfriend, Lauren Silverman, step out together!