Modern-day society seems to accept more “bad words” than our parents ever would have put up with, thanks in no small part to shows like SpongeBob. Where do you draw the line in your home? Do you correct your kids’ friends? 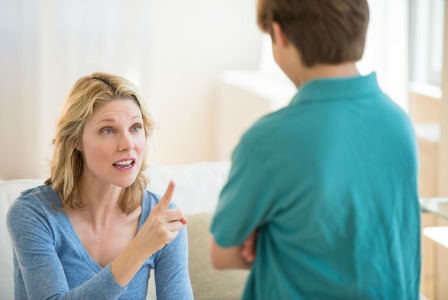 Has our everyday use of foul language made it seem OK for our kids?

There was a time — before MTV, HBO and SpongeBob — when even the word “damn” wasn’t used on television. Fast forward to the modern-day entertainment options and our kids are exposed to more questionable language than ever. Do you cringe at words like stupid or damn, or draw the line further down the road? How do you handle the use of colorful language in your home?

What constitutes a bad word?

While many of us may think of the most shocking of four-letter words as being the worst thing our kids could say, think about other words that we as parents use in our everyday language that may not belong in your kids’ vocabulary. “In our house, I don’t let my kids say fart, crap or even shut up,” shares Natalie Hoage of Mommy of a Monster and Twins. “They are all considered bad words.” Teaching your kids from a very young age that the words they choose have consequences — and can make other people feel good or bad — goes a long way toward developing a respect for the power of language.

Galit Breen of These Little Waves has three kids who are a little bit older than Natalie’s. “I let my kids say these words [stupid, dumb] as long as they’re not saying them to be mean.” She gives the example that smoking is stupid, but people are not. “So I don’t have hard and fast rules about language use because these are, after all, just words. But intent does matter to me, so I draw the line if someone is being unkind in any way,” she adds.

When friends are over

It’s one thing to try and teach your own children the words and phrases you aren’t comfortable with them using — what about when they have friends over? “If another child said one of those words in my home, I would definitely say something along the lines of ‘We don’t use those kinds of words in this house’ and would leave it at that,” shares Hoage. “If it continued, I would definitely talk to the child’s parent about it.”

Writer Jen Hajer of The Martha Project recalls a time when she had to deal directly with this situation. “We had this situation happen,” she shares. “My husband went to the basement where the kids were and said, ‘There’s not any swearing down here is there?’ They replied no even though we heard it. He then said, ‘OK, because if there is, that kid is going to have to go home.’ It didn’t happen again,” Hajer adds. “I’m not going to punish a child for making a mistake but will take action if they do not take action on the correction made by a parent.”

“I definitely feel comfortable correcting if it’s in our home, and I hope that other moms do the same if my kids are the offenders!” says Breen. “I think it’s trickiest at someone else’s house or out in public when the other parent is present. I’ll admit to leaving it be in the moment and broaching the topic with my own kids after the fact,” she says. “Everyone has their own rules and comfort levels, and I respect that.”

Monitoring use of less-than-desirable language often becomes the first difficult parenting issue parents have had to face. How can parents get their point across without sounding hypocritical? Can you effectively stop the behavior without actually drawing so much attention to it that it escalates?

Amy McCready is a parenting educator and author of If I Have To Tell You One More Time… The Revolutionary Program To Get Kids To Listen Without Nagging, Reminding, or Yelling. As the founder of Positive Parenting Solutions, McCready has dealt with this parenting dilemma before. She offers a few tips for parents who are dealing with the foul language issue.

9 hrs ago
by Ambrosia Brody