The top story from last night’s Video Music Awards on MTV is Miley Cyrus’ controversial performance. As a mom, I was surprised, however, to find that of all emotions to experience, it made me really, really sad. 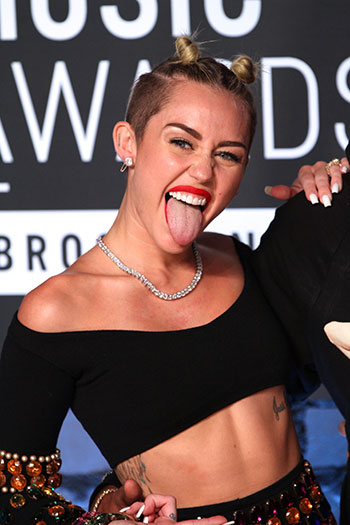 Miley Cyrus, the daughter of country singer Billy Ray Cyrus, has gone (seemingly in the blink of an eye) from sweet Disney superstar Hannah Montana to having an adult life — and if her performance at MTV’s Video Music Awards is any indication, she’s feeling very adult-like these days. The internet instantly burst into flames as she came onstage and gyrated around on giant teddy bears and with a 36-year-old married man, with most viewers feeling she went too far — way, way too far. “Disgusting!” reads comment after comment on every article I’ve viewed. But for me, as a mom, I was overcome with a feeling of sadness, not disgust.

Not my cup of tea

I admit the dance routine wasn’t my cup of tea, and in my opinion, it was tasteless and lacked class. I am also aware this is an understatement. I am not sure who dreamed up the whole tongue thing (would it never stop?), and seriously, what was up with the foam finger? It wasn’t sexy, it was just plain weird. Was she winging it as she went along, or was this actually planned out? By a professional? She looked awkward clomping around performing the moves too, and it just didn’t work.

Cyrus has failed to capture the spirit of powerful, yet controversial, women entertainers that came before her, such as Madonna, and seems to be reaching out to the world in the most controversial way possible, which has either wildly succeeded or massively failed. After all, everyone is talking about Cyrus and her disaster of a routine, aren’t they?

Cyrus simply bums me out though, for another reason. Like many moms, I experienced Hannah Montana through a young daughter’s eyes. She watched the show, had the toys, and I took her to see the movie in the theater. Hannah Montana was magical to her, and to me a little bit too. As my girl grew older, Hannah Montana lost her appeal, but I won’t forget the innocent appeal of a pretty girl who had a beautiful voice and a great gig.

Kids grow up. Mine do, and Cyrus did. I would imagine she’s as keen to shed her alternate persona as my daughter was eager to distance herself from the Disney princesses when she grew past that stage. Cyrus, however, is going about it in the wrong way, and for me as a mom, trying to reconcile Hannah Montana with this new young adult Cyrus is hard stuff.

The path they lead

I always feel for the child performers who grow up and lead a depressing, harrowing life that often ends too early. I don’t know what fame is like, but I can imagine that it’s a difficult thing to experience for a young child, and time and time again, we’re shown that children who grow up in the limelight turn out to be quite screwed up. We’re still waiting to find out how Justin Bieber is going to turn out, for example, but as I was watching his movie, it pained me a great deal because he’s nearly the same age as my oldest child, and I knew that he just didn’t have a hope of having a normal life.

Whether she likes it or not, Cyrus is a role model — has been for years, and probably always will be, to an extent. She doesn’t have a responsibility to be a good role model — after all, it’s her life she’s living, right? — but in a way, she really does, especially with how important she was for many years to little kids around the world, especially little girls. I do wish, however, that she would use her spot in the nation’s eye to do some good, instead of some crazy.

She has successfully entrenched herself into the media buzz of today, but where will she be tomorrow, or a year from now? As I’m parenting kids from the very little to the nearly free, stories like that of Cyrus really make me feel grateful for the quiet life we lead. I hope, for her sake, she gets a new choreographer, and uses her real talents to make her mark, instead of bizarre gimmicks and rebellion. She has a long life ahead of her — let’s hope she uses it to its fullest potential.

More on role models for kids