An 8-year-old boy in Louisiana shot and killed his elderly caregiver, and police say that he was playing a violent video game just before the tragedy happened. Are video games to blame, or is this a matter of poor supervision and improper gun storage? 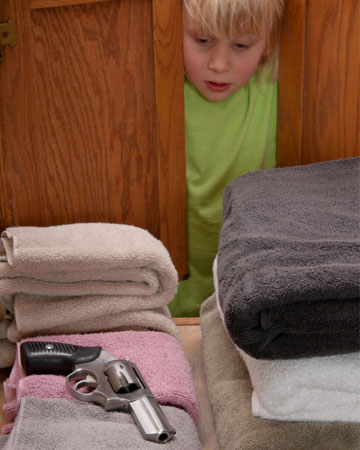 An elderly woman was shot and killed by her 8-year-old grandson, and the sheriff’s press release indicates he was playing a violent video game in the minutes before the incident occurred. Should the focus be on the video game, or should the fact that a young child had access to a loaded firearm be the real story here?

To many, the most distressing fact in this story is that an 8-year-old child had access to a loaded firearm — a gun, sources say, that belonged to his 87-year-old grandmother. The police report indicates that he was playing the video game “Grand Theft Auto IV” just before he shot Marie Smothers in the head, killing her. However, most moms we talked to expressed concern that he had access to a gun in the first place.

“I think what the real problem is, is that we have an 8-year-old with access to a loaded firearm,” said Heather, mom of two.

Kimmy agreed. Her son enjoys playing the video game “Halo”, but she has taken steps to make sure he understands the difference between the game and real life. “He has an uncle who’s a cop and a Marine who has taught him to have respect for guns,” she told us. “We also have none in the house — but if I did they’d be locked in a safe unloaded, with ammo locked somewhere else. Kids should never have access to weapons.”

“Grand Theft Auto IV” is rated M for “mature”, which means that you have to be 17 years old to buy it in a video game store due to the content in the game. According to Amazon.com the M rating for this particular game indicates the following content — intense violence, blood, strong language, strong sexual content, partial nudity, use of drugs and alcohol.

It’s not news that experts and parents alike are interested in the potentially desensitizing effects of violent video games. Connections have been suggested in the past between these types of video games and real-life violence — such as the mass shooting at Sandy Hook Elementary School — after investigators uncovered that Adam Lanza enjoyed playing them. But the connection is a loose one, and certainly all those who play violent video games do not commit violent crimes. However, parents and other caregivers should always monitor what their children are playing.

“I absolutely think violent video games — as well as movies and TV shows — can desensitize young, impressionable viewers,” said Shelly, mom of two. Bethany, mom of one, agreed. “Just as you wouldn’t let an 8-year-old watch an X-rated film, you shouldn’t let them play video games that are rated for adult,” she said.

Some felt that there wasn’t enough information given to really know what was going on in the home, particularly around the reports that this was the child’s grandmother and they shared a bedroom. “Why was he allowed to play the game?” wondered Liz from Iowa. “Why did he have access to a gun? Why was he in her care to begin with if he’s now back with his parents since she’s dead?”

Overwhelmingly, the lesson here is to keep your firearms locked up and unloaded, and keep your ammunition locked up as well. It’s also a good idea to monitor your children’s video game playing time, and only let them play titles that are age-appropriate. It’s horrible that this child’s life is starting out this way, and that his grandma’s life ended in such a tragic manner — hopefully this won’t happen again.

17 hrs ago
by Sara Gaynes Levy

17 hrs ago
by Amelia Edelman

20 hrs ago
by Jodi Bondi Norgaard