Do you love The Walking Dead? These baby names from the zombie-rific television series may be just what you’re looking for. 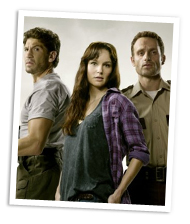 Do you love The Walking Dead? These baby names from the zombie-rific television series may be just what you’re looking for.

Fans of AMC’s wildly popular post-apocalyptic zombie show The Walking Dead will be gathering around their screens again on October 13, welcoming back returning characters like Daryl and Maggie and perhaps still mourning the loss of old faves that we won’t mention here if you’re not totally caught up with the story yet.

These names come from characters from the television series, which doesn’t totally follow along with the comic books that serve as its inspiration — but don’t despair, there are plenty to choose from. While these names are of characters that are survivors of the apocalypse, several have, ahem, reanimated at some point, but to preserve spoilers, we won’t mention who might be more zombie-ish than their peers.

Some of these baby names don’t sound quite modern, such as the names of Carl and his sister Judith — those names were more popular in the ’40s, ’50s and ’60s than they are today. But even if you’re not going to use one as a first name, you can easily pay homage to your fandom by using one as a middle name.

Other names are more modern-sounding, and some even have a classic feel to them, which makes them trendier than other names. Do you dare use a baby name from The Walking Dead?

The Walking Dead names for girls

The Walking Dead names for boys

Game of Thrones baby names
Out of this world names from Doctor Who
Magical names: Witch and warlock baby names