Kris Jenner shares the first photo of Kim Kardashian’s and Kanye West’s baby girl North West — and she looks just like her mommy! 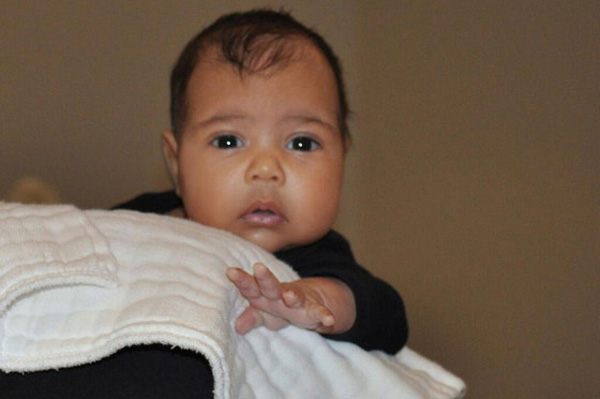 Here she is! Kris Jenner posted the first picture of North West since Kim Kardashian and Kanye West welcomed their baby girl over two months ago.

“Meet North West,” tweeted Jenner, posting this adorable photo of Kanye holding North as she peeks over his shoulder.

West shared the first baby photo of North on Jenner’s talk show August 23, much to the surprise of many who thought the media-savvy couple would earn big bucks in a photo spread for a magazine. In fact, TMZ reports that the couple turned down offers as high as $3 million for the first pictures of North, however Kim and Kanye chose to support grandmother Kris for the baby’s big debut.

How did she talk the interview-shy Kanye into the big sit-down? ”Well, you know, he’s my roommate. So, I have a way with my pancakes in the morning,” she told E! News. ”It’s bring your son to work day, that’s what it is.”

Kanye sat down with Kris on her talk show and opened up about fatherhood. “You’ve made a brand-new person. The thing I think about as a dad is just protection. That’s my only goal — to protect my daughter. That’s my instinct,” he said during the in-depth interview.

In fact, Kanye almost pulled a Tom Cruise during the interview! ”I just dreamed about being next to her [Kim],” he told Kris. ”I keep saying it, I don’t wanna start jumping up and down on the coach!”

Kris had teased before that the first photo of North may be revealed on her show. ”I think she’s a beautiful combination of the two of them. It’s perfect,” she said of her new granddaughter.

Tell us: Do you think North looks like Kim or Kanye?

7 hrs ago
by Amelia Edelman

11 hrs ago
by Claire Gillespie