What were on the minds and Twitter feeds of some of our favorite celebrity moms? Two new celebrity moms just joined Twitter! Drew Barrymore joined the social media platform and wrote about her daughter Olive, while Celine Dion wrote her first tweet as well. Kristin Cavallari tweeted about her trendy mom style, while Kim Kardashian pulls a Kanye and gets catty via Twitter. Reese Witherspoon’s vacation shot rounds out our list of top celebrity mom tweets. 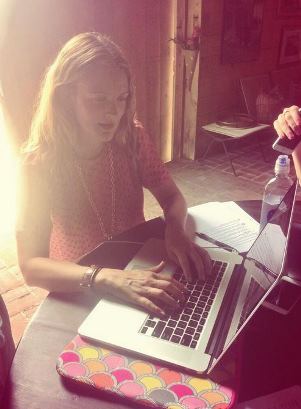 “Late to the party, but happy to be here! 140 characters should keep me from rambling…someone told me it doesn’t all have to fit in 1 tweet,” tweeted Drew Barrymore, writing for the first time on August 20, using her handle @DrewBarrymore.

The actress, at last count, has over 42,000 followers and is following three people, including her own makeup line, Flower Beauty, Barrymore Wines and InStyle magazine.

Barrymore, who posted this picture of her at her computer, took part in a “twitterview” with InStyle and let fans tweet her some questions on Thursday, using the hashtag #AskDrewInStyle.

“What made you start your own makeup line (which is fabulous BTW!)?” tweeted another. “I wanted to create high-end formulas at an affordable price because women deserve the best @flowerbeauty,” Barrymore tweeted back.

“If you could give Olive one piece of advice to know growing up, what would it be?” tweeted a fan, referring to her baby daughter Olive. “What I tell myself: When a woman smiles, she is the most beautiful. #laughlinesrule,” she responded.

“If you weren’t an actress, what could you see yourself being instead?” tweeted another. “Ooh, I fantasize all the time about different lives. Today… a horse jockey, a pie-maker, a sommelier,” Barrymore tweeted back.

Her good friend, Jimmy Fallon, even got in on the fun, tweeting to Drew, “Can you finish this rhyme? Jamming with my boombox, walking 30 miles…”

“…eatin’ greasy cheeseburgers with my friend @Harry_Styles,” she tweeted back.

Gotta love Drew! We can’t wait to read more tweets from her!

Barrymore isn’t the only celebrity mom to join Twitter this week — as Celine Dion got into the social media spirit this week. Dion, who has 2-1/2-year-old twins Nelson and Eddy and a 12-year-old son Rene-Charles, posted her first tweet on Wednesday that said, “Hello Twitter! How are you? Excited to talk to you more…”

The singer currently has over 31,000 followers and is only following one “person“ — the Vine app.

Which brings us to the second tweet: “Hello everybody! Happy to be a part of Vine!” she later wrote, linking to a short video on Vine of greeting her fans and talking about her new album. 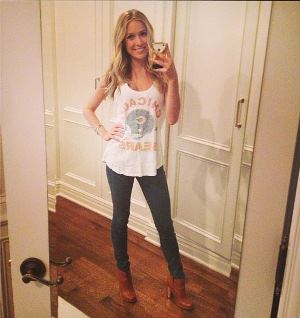 “Somehow I managed 2 get in a mini workout, shower & get ready, paint my nails, & finish packing while Cam took a nap. My fellow moms know,” wrote Cavallari, referring to her 1-year-old son Camden with her fiancé, Chicago Bears’ Jay Cutler.

She even got a tweet from her former Laguna Beach buddy Heidi Montag.

“Happy belated bday to your little angel! So happy for you mama!” tweeted Montag.

She also took to Twitter to defend herself after some tabloids say she has gotten too thin. “So maybe people should stop judging. U don’t know how much I eat or what I weigh so zip it!” she tweeted.

She also shared a photo of her adorable son Camden, writing, “We made it! Mommy/baby LA trip!”

North West’s mom Kim Kardashian has kept her baby girl on the down-low since giving birth this summer, but, in a surprising move, did call out Katie Couric on Twitter! This backlash comes after Couric told In Touch Weekly, “I don’t understand — why are [the Kardashians] so famous?”

Kim posted the following baby gift and note from Couric with the caption, all in hashtags, that read, “#IHateFakeMediaFriends #MayIHumblySuggestYouNotSendGiftsThenTalkSh*t.” 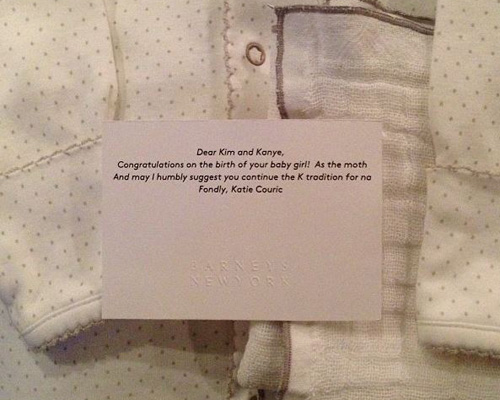 Ouch! Perhaps Kanye West is rubbing off on her a bit?

Reese Witherspoon is another celebrity mom that recently started tweeting, and, from the looks of it, the mom of three is taking a little vacation time.

“The only way to parent #Bahamamama“ tweeted Witherspoon, posting this snapshot of her lounging by the pool in the Bahamas with a baby bottle nearby, presumably for 11-month-old Tennessee Toth. 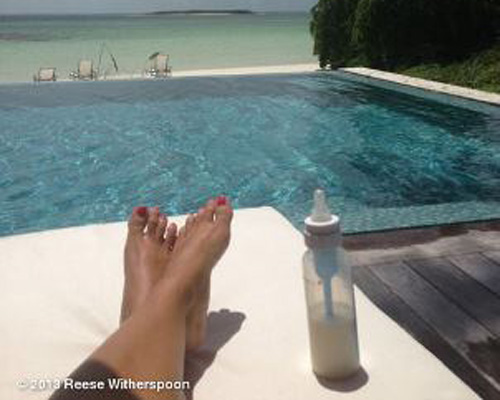 Check out our roundup of the best celebrity mom selfies from Gwyneth Paltrow, Beyonce, Kourtney Kardashian and more >>