Jenni’s son was getting sicker and sicker, but it wasn’t until she decided to remove gluten from his diet that she saw an improvement. 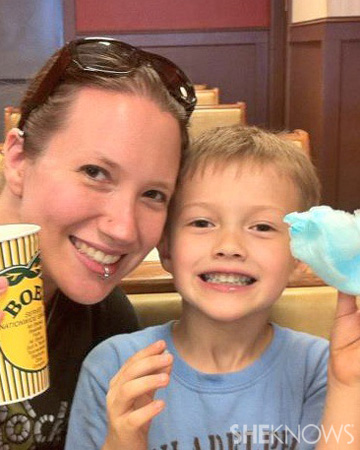 Even though he doesn’t have an official diagnosis, she’s certain he has celiac disease and reports that he is completely normal with the diet change.

Each year, more and more is known about celiac disease, but many kids are still going undiagnosed — and moms often uncover clues that their doctors miss. Jenni is one of those moms. Jenni and her husband, Richie, recently relocated to New Jersey after living in Philadelphia for 10 years. Their son, Richard, started exhibiting symptoms of illness when he was very small, but they didn’t connect the dots until he was older. Now 7, he has been gluten-free for several years, but her own research and intuition is what led her to removing gluten from his diet.

Problems from the get-go

Jenni’s son, Richard, was born 7 years ago, and she reported that he displayed symptoms right away — although at the time, she didn’t realize exactly what was going on. Richard was breastfed, and he did not seem happy or comfortable, and cried a lot.

She also noted that his poop was not typical for a breastfed baby. Normally, breastfed baby poop is mustard yellow, seedy and doesn’t have much of a smell (or, as some moms report, it smells like buttery popcorn). Richard’s poop, however, was foul and smelly.

As he grew a little older, his demeanor continued to be unhappy. He also began to display unusual behavior. “He developed what I called ‘baby restless leg syndrome,’“ she told us. “He literally kicked his little legs constantly like he was running a marathon 24/7. I later on found out this can be one of the symptoms of celiac disease, and restless leg syndrome is even being linked to celiac in some studies.”

As Richard grew older, he started to develop even more symptoms. When he was around a year old, an itchy rash appeared on his face, and his pediatrician initially diagnosed it as baby eczema and prescribed a steroid cream. As he grew through toddlerhood, he started to exhibit alarming behavioral symptoms — severe tantrums and lack of focus. “He had epic meltdown tantrums for no real reason and they would last for hours,” she remembered. “Absolutely nothing would calm him down. He didn’t seem to be acting like my friend’s kids who were the same age as Richard. Instead of actually playing or engaging with toys, he would just pick them up and throw them.”

His intestinal problems got worse, too. “At around age 3, he started exhibiting stomach issues — off and on belly pain that never seemed to have a real cause. He was also pooping a lot and his poop was a light beige color, which is a classic celiac symptom.”

And he started to have issues with his nerves at around the same time. “Another symptom that popped up was ‘tickling toes’ as he called it,” she shared. “The big toes on both of his feet would ‘tickle inside’ so badly that he would literally be scraping them on the floor. I learned that this is due to something called peripheral neuralgia, which is basically nerve damage.“

18 hrs ago
by Carly Leahy