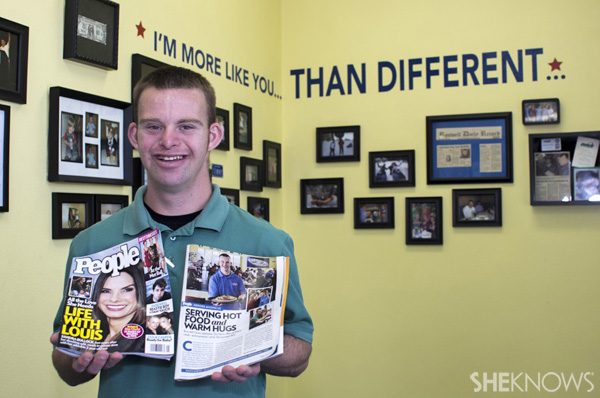 Keith and Jeannie Harris admit they began to think about their son Tim’s future when he was just a baby. “[Our] first thoughts were maybe more about fear for his future, then they became what can we do to help him get any edge that could make a difference,” his mother explains.

Tim’s parents didn’t sit idly by and wait for the future to come to them. They began therapies for Tim at 3 weeks old and also began attending the National Down Syndrome Congress’s annual conference.

“We were surrounded by families and people with Down syndrome of all ages,” Jeannie remarks. “We had many glimpses into a possible future for Tim. People with Down syndrome were going to their own workshops, attending dances, sitting in the lounges and laughing with their friends and speaking in front of hundreds of people. They were fearless!”

A love of people — and food!

As Tim entered the teenage years, his parents began to think seriously about options. “When his dad told him that maybe he could go into business for himself, a restaurant seemed obvious. Tim loves food and he loves people,” Jeannie says. “The idea began to grow.”

Tim’s Place opened in 2010, serving breakfast and lunch seven days a week. Tim has never looked back. “Nothing can stop me,” he says, when asked if having Down syndrome keeps him from doing anything.

“I am happy every day,” the 27-year-old explains. “I love my life and I share that love to the world.” His favorite menu item? Free hugs.

“Not everyone wants a hug but they do want to feel love and be happy,” Tim says of his customers. “They are surprised sometimes to find out Tim’s Place is owned by me. Some of them even cry. Sometimes it makes me cry too — even when they are happy tears. I have the same emotions and feelings of other people.”

They are going to be OK

Jeannie and Keith say the best advice anyone shared was to trust themselves and their expertise in their own child. “Sometimes you look to the future and plan for what’s ahead. Other times you just live day-by-day and do your best,” Jeannie says.

The Harrises look back on Tim’s upbringing and wish they’d done just one thing differently. “We would follow advice the advice our son Tim gives to other families when asked. Tim says, ‘You need to just relax and love your kid. They are going to be OK.'”

While Andrew’s, Christian’s and Tim’s stories are unique, the dream of helping children with disabilities thrive and contribute to their communities is the common denominator for their parents — as well as the keen ability to recognize their children’s strengths and genuine loves.

Weir says NDSS supports a new National Governor’s Association (NGA) initiative called A Blueprint for Governors, which specifically focuses on A Better Bottom Line: Employing People with Disabilities. Weir says the blueprint “serves as a road map of concrete and practical things that governors can do to advance employment opportunities for people with disabilities in their states.”

Read more about Down syndrome