Two military moms got booted out of a cafe because their kids were messy. And to make matters worse, the owner of the cafe took a photo of the mess and posted it on her professional Facebook page. 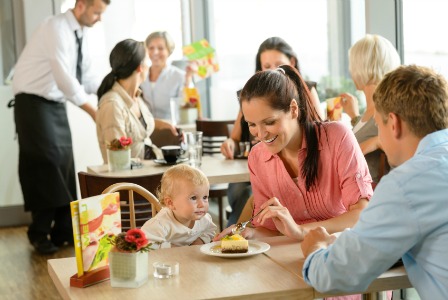 Should parents always clean up after their kids when dining out, or was this business owner way out of line?

Cafe owner Lorraine “Rainy” MacDuff has made the news, and not because her business practices are being lauded — instead, she has come under fire because she posted a photo of the mess two children left behind on her business Facebook page accompanied by a sarcastic comment about how much she enjoys patrons that don’t make messes. This has led to an outpouring of support for the business owner from one crowd and condemnation from people who feel she should expect noise and messes from children. One of the women involved has stated that one of her children was having a tantrum and the scones they were eating made a mess on the floor. However, they wouldn’t have had a chance to clean up anyway because the owner came over, scolded them, told them to leave — but they could come back without their children. Who’s right?

Many people feel that this business owner made a really bad and highly unprofessional move for several reasons.

“I think this was a very poor business decision, unless her goal is to lose the stay-at-home mom business she likely relies on,” said Tara, mother of one. As Stacy, mom of three, pointed out, “If my child is having a meltdown while eating, and then I was asked to leave and not return with my children, the mess is probably not going to get cleaned up by me.”

Lisa, mom of three, agreed. “The cafe owner was in the wrong,” she explained. “She says she is sarcastic… fine and dandy for your friends, not the general public. If she wants an establishment with no kids, open a bar.”

Many commenters on the cafe’s Facebook page are siding with the business owner, however. “Kicking those disgraceful breeders out was the right thing to do,” said Facebook commenter Steven. “Poor parenting leading to screaming monsters can ruin a nice meal for everyone. You were in the right to post the picture, and the fact that that awful mother showed no shame is proof that her children will grow up to be failures.”

Cleaning up, or not?

We asked moms if they routinely clean up after their kids when they take them to restaurants, and the answers were similar.

“As a mom, I always try to clean up as much as possible after my kids eat out, but I would not go as far as sweeping crumbs up off the floor (although I do sometimes pick up bigger bits of food),” shared Rebecca, mom of four. Charlene from New York agreed. “I don’t clean up what mess they leave on the floor,” she said. “If I wanted to clean up after them I would stay home. That’s their job at a restaurant… to clean up the floor.”

Bridgetta, mom of three, also felt that parents do have a certain responsibility when out and about with their kids. “I have been to places where people literally laugh at their kids throwing stuff all over the floor,” she remembered. “I would never do that — it teaches the children bad table manners and it isn’t funny either.”

The owner has since deleted the Facebook photo and issued a public apology, and will probably think twice before doing something similar in the future. However, in this day and age, with the power of social media, she should not be surprised at the reactions from the general public. As Stacy succinctly explained, “At the end of the day, the owner can do what she wants on her Facebook page, but she should expect some backlash.”

More on dining out with kids