Want to help your teen get ahead of stress? Maybe mindfulness training will give your teen the edge over stress and tests that he needs. 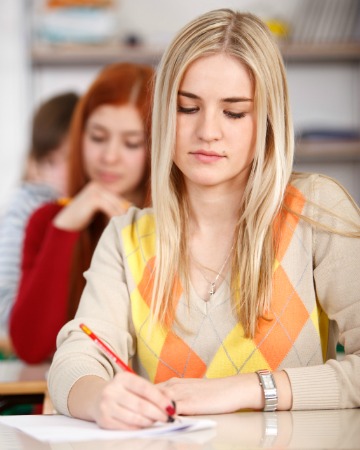 A study out of the University of California Santa Barbara suggests that teens can rewire their ability to regulate attention and stress. Would it work for your teen?

While it may sound like a touchy-feely catchphrase, the concept is simple — train your brain to tune out distractions and focus on the task at hand. This centuries-old practice has been helpful for everything from chronic pain to stress reduction. Could it help teens improve their test scores?

Not a new concept, the idea of mindfulness has been on the radar of mental health professionals for quite some time. Mindfulness is the act of freeing your mind and getting rid of the mental “clutter” so that you can be more focused and less stressed. Picture yourself grocery shopping, for example. As you roam the aisles, you are most likely not focusing on the sounds, the colorful produce, your child’s chatter from the cart or the smell of freshly-baked bread as you pass the bakery counter. If you were practicing mindfulness, you would focus on these specific moments, rather than letting your mind wander to your to-do list at home or the argument you had with your spouse.

In a study out of the University of California Santa Barbara, a group of students participated in a two-week mindfulness training program. Not only did they see a decrease in their mind-wandering, but their working memory capacity improved. When given a reading comprehension test — which was actually a section of the Graduated Record Exam (GRE) — their performance actually improved. No change was seen in the control group, which focused on nutrition. While the study was done on a small scale, the results were clear.

How it applies to teens

Picture the life of a teenager today and the distractions are mind-boggling. Tests, texts, tweets, friends, sports, family, job and hobbies are all facets of a teen’s life that can quickly cause a lot of mental clutter. Elisha Goldstein, Ph.D., works with teens and adolescents with a mindfulness curriculum he created with his wife called Connecting Adolescents to Learning Mindfulness (CALM). “What happens is that the adolescent brain (as does the adult brain) defaults to certain ways to cope with this high level of stress,” Dr. Goldstein says in a post on his blog, Mindfulness and Psychotherapy. “These unhealthy habits include, but are not limited to: Procrastination, over-eating, under-eating, isolating, self-harm, sleeping too much, not sleeping enough, working harder into the night at the expense of health, worrying and at times, the extreme attempt of suicide. It’s hard to focus on a test when all this is going on,” he adds.

“Today’s teens are a generation raised under the specter of our culture’s literally celebrating the concept of multi-tasking,” shares John McGrail, Ph.D., who has worked with many teens to help improve their academic success. “They [teens], like we all, are inundated with information almost 24/7 and from seemingly innumerable sources. Thus, it’s not surprising that they are prone to and or have attention and/or study habit issues — especially considering that most teens aren’t necessarily thrilled with the subject matter in school to begin with,” he adds.

Put it to work

What would mindfulness training do to help your teen focus and clear the mental clutter? The CALM program developed by Stefanie Goldstein, Ph.D. and her husband teaches teens effective methods for dealing with stress, disappointment, change and emotions by showing them how to slow down, focus on the present and make thoughtful decisions. During the eight-week course, teens use a combination of movement and meditation in an effort to learn ways to clear their mind and reduce stress and anxiety. Armed with these tools, teens no longer feel powerless against their anxieties and stress. Your teen can implement simple deep breathing and relaxation techniques at home to reap some of these benefits.

“Becoming more mindful, more aware, relaxes the mind and helps creates a more balanced perspective on the issues we tend to blow out of proportion,” shares Dr. McGrail. “It improves self-esteem through the more balanced perspective it creates. We learn not to sweat the small stuff and to realize it’s all small stuff,” he says. “It helps us learn to focus quickly, and to eliminate distraction, improving one’s ability to do one thing at a time and do it well — the brain gets to work the way it’s designed to work. Scores and grades go up,” he adds, “sometimes quite a lot.”

Think your teen could benefit from mindfulness training? Maybe we could all use a bit less mental clutter.

The ultimate guide to puberty
How to fix your teen’s bad sleep habits
Teen depression or normal mood swings?

8 hrs ago
by Ambrosia Brody