Happy Wednesday Hump Day — also known to us as Celebrity Baby Bump Day! We have rounded up the cutest pregnant celebrities of the week, including Fergie, who celebrated her pregnancy with an outrageous “gayby” shower! The Real Housewives of Atlanta’s Kim Zolciak is pregnant with baby No. 5 and showed off her baby bump via Twitter, as did pregnant Jaime King, who looked gorgeous in a white bikini. Pregnant Halle Berry and Courtney Mazza round out our list of cute pregnant celebrities of the week. 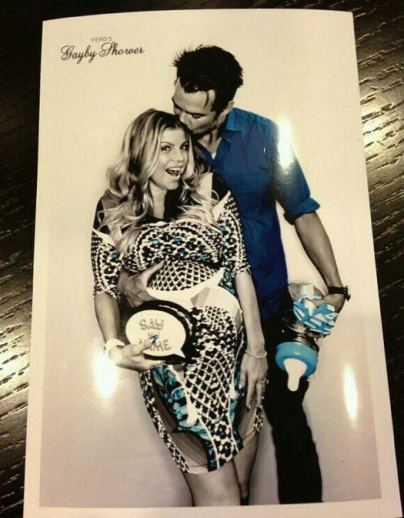 “Who knew a baby shower could be so fun,” tweeted Josh Duhamel, sharing this photo of the dad-to-be and his pregnant wife, Fergie, at their baby shower… or, actually, their “gayby” shower, as this photo indicates.

The Black Eyed Peas singer was thrown an extravagant “gayby” shower by her gay BFFs, including agent Sean Patterson, celeb hairstylist Andy Lecompte and DSquared2 designers Dean and Dan Caten, who went all out at the SLS Hotel in Beverly Hills with drag performers, tequila cocktails (sorry Fergie, not for you!) and a onesie decorating station. Many of the guests even brought their kids, as there were face painters and balloon animals for the younger attendees.

Drag performer Courtney Act performed “Let’s Hear It for the Boy” in honor of the baby boy who will be born within the next few weeks. The star-studded shower guest list included Molly Sims, Julianne Hough, Lance Bass, Kelly Osbourne and Perez Hilton. The cake was four-tiered and featured a teddy bear at the top.

Fergie showed off her chic maternity style, wearing a printed pink, black and teal dress to her shower.

Next up: The Real Housewives of Atlanta’s Kim Zolciak shows off baby bump No. 5