The alphabet contains the basic building blocks for our written language, and is important for kids to learn — and it’s easy to do right from home, before they even enter school. 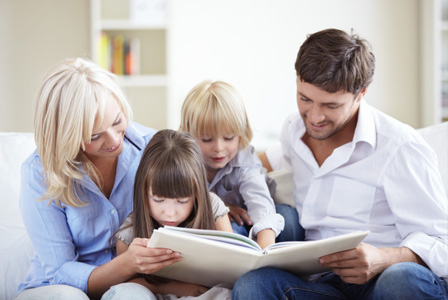 Letters make up all of the words we see, and learning to read and write is a basic, fundamental skill that children must learn as they move through life. The alphabet — those 26 letters that often look and sound alike — can be taught earlier than you might think. Even better, it’s really not a lot of work for parents to help their youngster learn the ABCs.

Read to your child

Reading is so important, and it’s never too early — nor too late — to begin. Reading helps babies and children make valuable connections in their brains well before they even realize there is a book in front of them. With regular reading, they will begin to realize that there are pictures on the page, and also that there is text — and they eventually become aware that the letters have significance.

Work on your child’s name

Most early childhood experts recommend first pointing out the letters in the child’s own name. When a child is 2 or 3 years old, they may be able to understand that there are different letters, and each has a different sound. When your child colors, scribbles or draws, sign his name to the work of art and point out the letters. Make sure you emphasize that the letters come from his own name. With enough exposure, he may start to recognize”his” letters from signs or newspapers without your prompting.

Hands-on, tactile learning comes when your child has alphabet puzzles or magnets to play with. It will be a simple game at first, but if you get on your child’s level and tell him the names of each letter, he may surprise you by being able to name some of them the next time you play. Printable projects will also be fun for you to do with your little one. Make them a part of your daily (or weekly) routine.

Some parents swear by educational television shows — or even computer games or apps — to teach their children the alphabet. “Years ago, my daughter was allowed to occasionally play a Blue’s Clues computer game that required the child to click on the proper letter to make it through a maze,” said Melody, mom of two. “I was pretty astounded to realize that she knew most of the alphabet when she was just 2 years old!” Moms overwhelmingly recommend the Leap Frog brand, which makes a variety of different learning toys that focus exclusively on the alphabet.

Learning the alphabet early does not mean that your child will be a better reader than her peers who didn’t, but it can really be a lot of fun for you and your kiddo. Most kids won’t be able to write letters until they are at least 4 years old, but even then, don’t force your child to learn something he’s not remotely interested in. Take cues from your child — some kids soak up learning things like this at an early age, while others have different strengths, such as spatial relations or amazing physical skills.

Read to your child from an early age and don’t worry about sitting down and teaching him the alphabet. But if he’s ready to learn, it can be done in a few steps — and don’t forget the easy magic of the ABC song!