When you have two kids in a traditional family, there is one parent for each child and you can divide and conquer if both kids have needs at the same time. Thinking about going from two children to three? It may be harder than you imagine — or it may be a lot easier.

Related story Jewel Has a New Drummer on Tour — Her 10-Year-Old Son: 'It's Going to Make Me Love Touring Again' 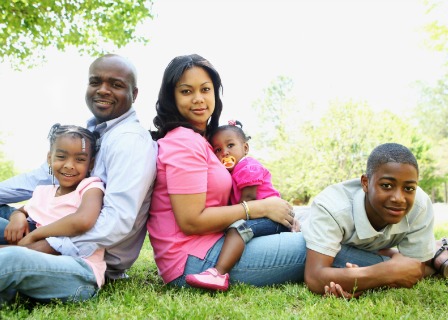 A third child tips the balance, and some parents feel overwhelmed in times of kiddie-crisis. Others report that going from two to three is much easier than going from one to two. What will it be like for you, and what do moms who have been there, done that have to say?

Some moms reported that going from a family of four to a family of five was no big deal — the youngest sibling seemed to slide right into their everyday lives. Sometimes, this depends on the age of the older children. “I enjoyed going from two to three,” explained Alisha, mom of two boys and a girl. “The boys were 4 and 5 and I found that they kept each other occupied while I looked after the baby. It is a little difficult being outnumbered, but it was an easier transition for us than going from one to two was.”

Learning to let go of high expectations is one of the key points that moms of many learn as they increase their family size. Housework, extracurricular activities and smooth household operations often suffer as you parent your large brood. Rebecca, mom of four, realized this — but a little too late. “It was time to start embracing the inevitable messes and chaos,” she said. “Of course, I didn’t really realize that letting go of the idea of order was the key to my sanity and happiness at the time! I think I fully embraced that going from three to four.”

“Not what I expected”

Other moms were surprised at how difficult adding a third child to the family was. Ashley, who lives in Canada, told us that going from two to three was very hard. “I’m not even 100 percent sure what it was that made it seem so hard but it was definitely not what I expected,” she explained. “There is always someone that needs something and no one wants to wait five seconds for us to get to them.”

Adding a third child to your family poses unique challenges, some that you may not have considered before. Charlene, who is contemplating a third baby, said that she thinks about what big changes her family will need to make as a family of five. “We’ll need another kitchen chair, a new vehicle, a bigger apartment and two rooms when we go on vacations,” she shared. Jane, a working mom of three, agreed. “It seems the world caters to a family of four,” she said. “We needed a bigger car, special car seats for mine, will need a bigger dining table eventually and daycare for three is more than my mortgage.”

Of course, having a larger-than-average family has its benefits too. Amelia was a mom of one when she discovered that she was pregnant with twins. The early months were difficult, as you could imagine, but she said that was not always the case. “Once the twins got a little older and were playing with Lily, having three was wonderful!” she happily remembered. “Going from three to four was a breeze! Travel is difficult… most places we need two bedrooms now. We’ll need a bigger house soon too. But I wouldn’t trade our big family for anything!”

We disagreed on the size of our family, and our marriage ended
Duggar-style parenting tips for large families
Find the ideal sibling age gap

20 mins ago
by Sydni Ellis